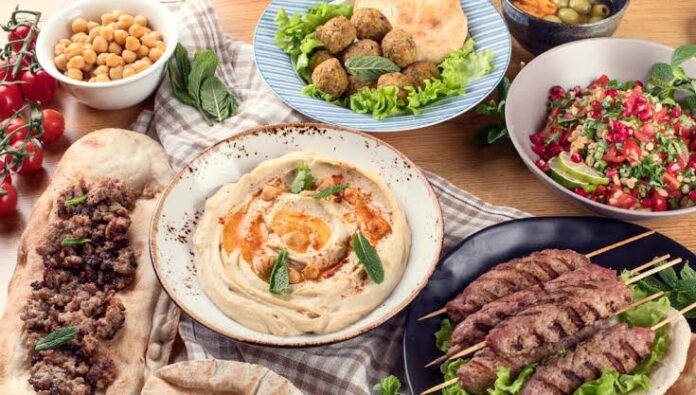 Egyptian dishes are one of Africa’s most distinctive and fascinating culinary traditions, with recipes that date back to the ancient Egyptian civilization.

The cuisine of Egypt is rich and nourishing, combining hearty staples with lots of heat, spice, and kick, and it is influenced by the Mediterranean, North African, and Middle Eastern cuisines.

Egyptian food may introduce you to a wide variety of unique and mind-blowing flavors, from the satisfying and hearty to the sour and hot.

With that being said, here’s a list of 10 most popular and traditional Egyptian dishes you should try having soon.

The first meal on our list of Egyptian dishes to try out is Fouls Mudammes.

Foul Mudammes is a slow-cooked fava bean stew that is largely eaten for breakfast in Egypt.

You can eat foul mudammes mashed or in their full form. Cumin, lemon, oil, pepper, salt, parsley, onion, and butter are some of the most typical seasonings that are added to it.
Restaurant chains that specialize in Foul mudammes are many.

Fries, fried cheese, falafel, and fried eggplant are common side dishes to be ordered with Foul mudammes.

Fava beans and greens are combined to make falafel (Taameya), which is then formed into balls or patties and fried. Falafel Mahsheya are falafel patties that have occasionally been filled with a red, spicy paste.

Cheesy falafel, which is packed with cream cheese before frying, is made by contemporary chains and certain up-and-coming chefs.

A common local dish called koshary is consisting of boiled lentils, rice, macaroni, and chickpeas, as well as fried onions and a distinctive crimson sauce from Egypt.

Usually, extra packs of vinegar and hot sauce are provided for the customer to add to their liking.

Alexandrians give Koshary their own unique spin by including grilled liver in it!
Similar to Foul Mudammes, Koshary is sold by both street sellers and numerous restaurant franchises.

You probably won’t find stuffed pigeons served anywhere else in the globe.
The pigeons are first boiled before being filled with grits or spicy rice, onions, and tomato sauce.

The pigeons are then either cooked in deep fat or baked in the oven. Although this recipe has a lot of fat and carbohydrates, the taste is worth it!

You can only eat this dish with your bare hands; put the fork and knife away!
The pigeon’s internal organs are a unique addition in some restaurants to the stuffing of rice or grits! You did read that correctly.

Tarb is a lovely fatty variation on the traditional “Kofta”. The ingredients for kofta are minced beef, onions, some minced fat, and spices. Kofta wrapped with a coating of roasted lamb fat till it turns golden brown is known as tarb.

All around Egypt, there are restaurants that specialize in serving grilled meat products. You can locate Tarb there.

Molokhia is a green soup created from the shredded leaves of the plant. You can make it with chicken, beef, or even bunnies!

Ghee and garlic are heavily concealed in this soup. Depending on the area, there are many different ways to make molochiya.

For example, it is known as “Shalwlaw” and is served cold in upper Egypt.
It is made differently and is deeper in color in Aswan than it is anywhere else in Egypt because dried Molokhia leaves are used in its preparation.

Wherever you choose to eat it, Molokhia is a nutrient-rich soup that helps the immune system thanks to broth, Molokhia leaves, tomatoes, and garlic.

The soup known as halabessa is served in cups with straws. It is created using chickpeas that have been boiled with a mixture of tomato, onion, garlic, and numerous spices.

It comes in a cup with a straw for drinking the soup and a spoon for eating the chickpeas. It is a wholesome vegan alternative that keeps you warm and satisfied at night.

Halabessa is offered for sale at tiny stalls near the sea or the Nile. The kiosks typically have Arabic calligraphy and beautiful lights, and they also play traditional Egyptian music.

The combination of all of the aforementioned elements and the spiciness of halabessa creates the ideal ambiance for a chilly Egyptian night.

Rice is a staple of Egyptian cuisine. Some of the most common vegetables in Egypt that are packed with rice are zucchinis, eggplants, bell peppers, tomatoes, and vine leaves.

Vegetables taste entirely different when stuffed with the special rice mixture; they just aren’t the same without it.

If you ever get the opportunity to have some Mahshi, order a mixed plate and choose which dish you prefer the most.

“Mombar” is a different variety of Mahshi that is not made from vegetables. A cow’s intestine is used to make mombar, which is packed with rice, various chopped greens, and tomatoes.

Cow feet that have been well cleaned and boiled are used to make the dish kawaree.

Kawaree soup is made with this gelatinous substance because of its consistency.
There are different methods to serve kawaree, although elderly people typically prefer it to younger people.

It is occasionally consumed with filled vine leaves or rice and tomato sauce (“Kawaree Fettah”). To satisfy every taste bud at once, you combine a tiny piece of kawaree with one packed vine leaf.

Hawawshi is essentially Balady pita bread packed with minced meat, butter, and baked.
Like with other traditional Egyptian foods, unique modifications have been made by Egyptians. Hawawshi is now available in several variations, including pastrami, tuna, and sausage.

In Alexandria, the meat is wrapped in fresh dough rather than pita bread, which is an intriguing change. As a result, it resembles pizza rather than bread. Alexandrians then take it a step further by topping it with mozzarella, pepperoni, and tomatoes to make it resemble pizza.

One of the most delicious and filling delicacies from Egypt is fetar! It literally means “pie,” but there’s much more to it than that. It is constructed of numerous sheets of delicate buttery dough.

It can be eaten plain, with molasses and tahini, which is a delightful combination that you must try!

Both sweet and savory fillings for filled feta are very popular. The few savory fillings that Egyptians favor include sausages, chicken in various sauces, veggies, and minced meat.