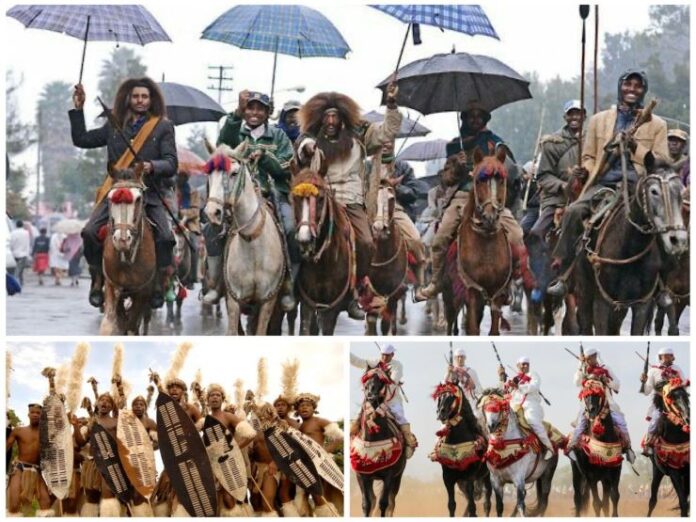 The warrior and army tribes in Africa were a strong force since many African tribes are renowned for their resilience and skill in the face of conflict.

Ancient African kingdoms that were thriving relied heavily on their armies and warriors for defense and expansion. Strong military forces ensured that many larger kingdoms maintained their supremacy for many centuries and were feared by smaller ones.

The history of ancient Egypt, one of Africa’s earliest known civilizations, contains the earliest reference to an ancient African army. Many other ancient kingdoms had equally powerful armies, among which included the Somali and Mali Empire and the all-female Dahomey amazon warriors.

With this is mind, let’s discuss the 10 strongest warrior tribes in Africa

They are undoubtedly the tribe with the greatest reputation due to their fighting skills. The Zulus are the biggest tribe in South Africa, and they have a reputation for being fierce fighters who gave Britain a run for its money even though they lacked technological weapons.

This proves how powerful the Zulus would be if they had such weapons.

Imagine being fierce in combat and employing well-thought-out military tactics with no aid of technology.

Even with simple weapons, they were able to overcome the British army thanks to their effective tactics and plan.

This is why they are recognized as one of the strongest warrior tribes in Africa.

The Abyssinians tribe is the majority tribe in Ethiopia and Eritrea, and this is both politically and culturally. They serve as both nations’ primary languages.

The began their military history during Axum era when they conquered the southern Arabians.

They are a strong mountainous tribe that had a long history of victorious fighting. Thanks to their ideal topography, they were able to successfully repel most invaders.

According to historians, this tribe has one of the best and most effective fighting strategies in human history.

Hence, we can’t leave them out of the list of the strongest warrior tribes in Africa.

The Berbers were particularly well-known for conquering Spain and opposing attempts at colonization by the Persian and Roman Empires. They were so strong that they expanded, took over new lands, and ruled over areas in the Mediterranean.

A huge portion of their population was converted to Islam during their rule over the Mediterranean Sea and other West African nations.

This tribe is seen among Libya, Morocco, and Tunisia, three nations in northern Africa.

However, they are known for founding the Kush Kingdom, the longest-lasting Kingdom in Africa.

All foreign invaders, from the Middle East to Europe, were repulsed by the Kush Kingdom, which also successfully overthrew and ruled the Egyptian Empire.

Additionally, they overcame and rebelled against the Arab caliphate before peacefully converting to Islam in the end.

Their greatest achievements include fighting off and then defeating invasions from Europe, the Middle East, and the Arab caliphate.

They are the largest tribe in East Africa and are probably most famous for their merciless expansion in the Horn of Africa during the 16th century, where they were able to seize huge fertile territories for their expanding population, and the land they have won is some of the best in the area.

By destroying the Abyssinian Kingdom and installing the Yejju Dynasty in its place, they made military history. A large portion of Ethiopia’s resistance to the Italians and Egyptians was also provided by them.

They are well known for being ferocious herders and warriors who ruled the plains of Kenya and Tanzania. They also engage in combat with and chase down lions to display their strength.

The Maasai tribe is a native African ethnic group in Kenya and northern Tanzania and they are semi-nomadic.

The Maasai are one of the most prominent African ethnic groups and are well-known internationally because of their ties to the national parks and reserves.

They have unique traditions, rituals, and clothes and live close to the several national game parks of East Africa.

The fulani tribe are the largest herding tribe in West Africa aside being one of the strongest warrior tribes in Africa and are dispersed in nations like Nigeria, Guinea, Mali, and Niger.

They are renowned for being ferocious nomadic warriors who oppressed and enslaved their fellow West Africans.

They are a formidable Bantu tribe that is notable for founding the Zimbabwe Empire, which once ruled southern Africa and compelled the Swahilis to pay homage to the great Shona emperors.

The Shona is a culturally diverse tribe with a distinctive culture and a rich history.

Although they are also present in Botswana, Mozambique, Zambia, and South Africa, this tribe is the majority in Southern Africa, making up 80% of the region’s population.

They are well recognized for having founded the most powerful Empire in West Africa, which they used to colonize numerous tribes there thanks to their formidable military might.

The Mali people also force the Berbers to impose tribute and successfully resist the Portuguese invasion.

They are without a doubt the strongest African warrior tribe that has ever existed. Their military fighting techniques are among the most advanced on the continent and date back to the time when they sent their strong mercenaries to Egypt to destroy the Hittites in the Land of Punt.

They are dispersed throughout four nations, including Somalia, Ethiopia, Kenya, and Djibouti, and inhabit the greatest areas in Africa.

They have the most extensive marine culture and history in Africa and are the most aggressive shepherds and traders. They defeated the Portuguese Empire in a naval battle during the Ajuran-Portuguese Wars and successfully resisted the Oromo expansion where they conquered their territory.

They were the first Africans to engage in naval warfare, especially against a European superpower like the Portuguese Empire in the medieval era.

As a result of their 14-year occupation of Abyssinia under the renowned Somalian leader Ahmed Gurrey, they were the first Africans to possess modern weapons during the Middle Ages.

Years back, they founded the most powerful empire known as the Ajuran Empire, which established the largest colonies in all of African history from Africa to the Indian Ocean and also controlled the trade in that region.

They have used their power by conducting naval expeditions as far as Southeast Asia. They are the largest and oldest Muslim population in East Africa, and they are well recognized for having spread Islam throughout the continent through trade and force.

They have in the past disgracefully compelled many powerful Arab kings to pay tribute while also sacking numerous prosperous Arab ports.