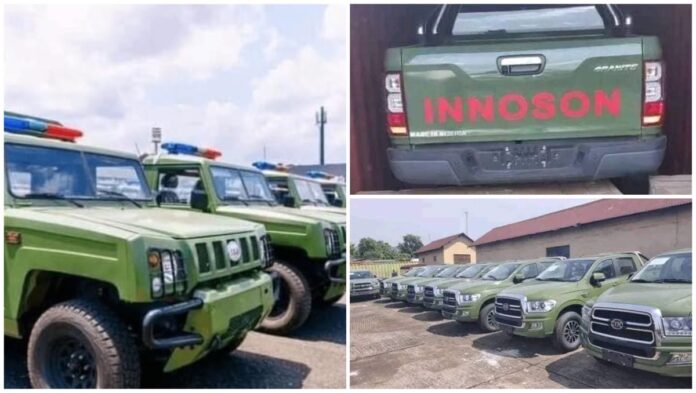 The first batch of vehicles made for the Government of Sierra Leone has been built and delivered by Innoson Vehicle Manufacturing Ltd.

The IVM was introduced in the West African country by the original vehicle manufacturer in Nnewi. The vehicles, which arrived in Freetown on November 21, 2022, were manufactured on behalf of the Sierra Leone Ministry of Defense.

The request for “Made in Nigeria” vehicles was raised during a working visit to Innoson Vehicles by the highest hierarchy of the Sierra Leone Ministry of Defense led by Mr. Edward Soloko, Minister of the Interior, and the Land Transport Authority of Sierra Leone SLRTC, led by its Chairman , Mr Isaac Kane Green.

Also, read; Members of the Sierra Leonean Parliament Get Into Physical Altercation Over Electoral Reform

Innoson Group’s head of corporate communications, Cornel Osigwe, said in a statement that several vehicle models purchased within this distribution have gone to the current Sierra Leonean administration.

Subsequently, Osigwe explained that the government of Sierra Leone, led by President Julius Maada Bio, ordered Innoson vehicles for officers of the Armed Forces of the Republic of Sierra Leone, RSLAF, worth US$4.7 million.

The first batch of vehicles shipped from Nigeria to Sierra Leone departed from Port Queen Elizabeth 2 (Port of Sierra Leone, “Water Quay”) in Freetown Monday for distribution to army officers across the country.

In response to the development, the people of Sierra Leone commended their President, Julius Maada Bio, for acting in keeping with the spirit of the continental accord by selecting an African brand, IVM, for vehicles for use by the country’s armed forces.