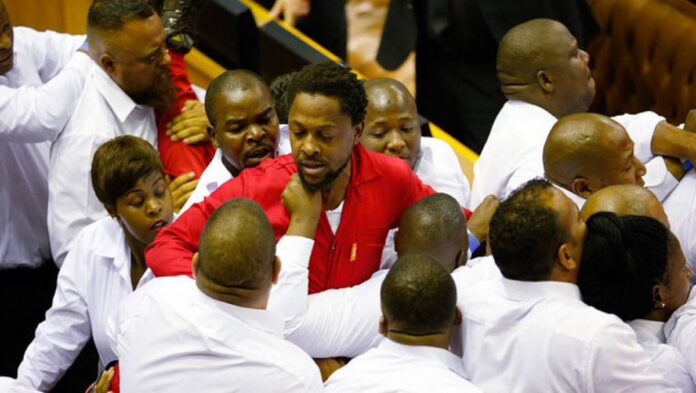 A brawl broke out in Sierra Leone’s parliament in Freetown on Wednesday (November 23) while parliamentarians were in session.

They discussed the proposal to change the electoral system to allow for proportional representation in next year’s elections.

One video shows representatives of the ruling SLPP and the opposition People’s Congress Party fighting and throwing chairs.

The West African country’s electoral commission has advised him to switch to a proportional representation system in next year’s local and parliamentary elections, with the exception of the presidential election.

The opposition claims that if the government backs the plan, the measure would be unconstitutional.

However, approval by Parliament is required.

Lawmakers tore up implements and broke a vase. Fighting started around 11:00 GMT and ended in the afternoon. According to local reports, police intervened to quell the riots and chased the rioting officers out of the area.

Last week lawmakers passed legislation introducing a gender quota in all elected and appointed positions ahead of next year’s election, in what was a big campaign promise for the president in 2018.