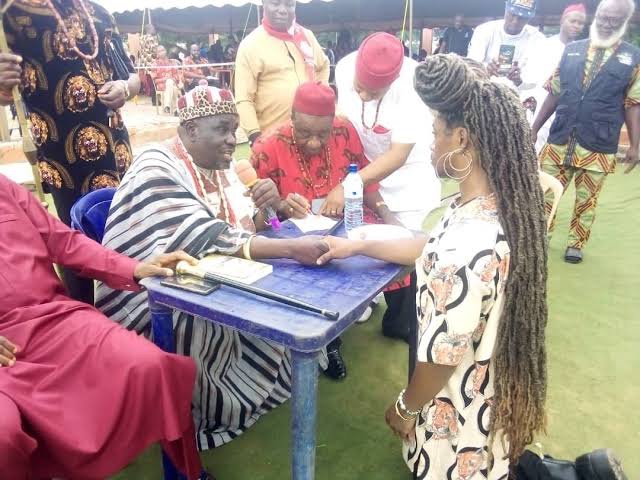 To further identify with their ancestral root, about forty students and faculty members at Morehouse College Glee Club in Atlanta, United States of America (USA), visited Nigeria to adopt Igbo names and declare their ancestry in southeastern Nigeria.

This event took place at the University of Nigeria, Nsukka, where the students shared how they traced the roots of their Igbo ancestors through DNA testing, which they described as reaching.

HRH Igwe Hyacinth Eze, the traditional ruler of the Ibagwa-Aka community in the Igbo-Eze South Local Government Area of ​​Enugu State, performed the naming ceremony along with the chiefs and elders of the community.

The Igbo elders expressed their joy and happiness at seeing Igbo Americans retrace their steps and identify with their source.

Some Igbo names given to Igbo Americans include Ezuomike, Ogalanya, Odenigwe, Anyim, Ifeanyi, among others.

The President of Ohanaeze Ndigbo, Enugu State Chapter, Prof. Fredrick Eze, addressed Igbo Americans during the naming ceremony and said the reunion would contribute to the development of Igbo communities.

In addition, the monarch, HRH Igwe Hyacinth Eze, said he was also happy with the spiritual, cultural and economic exchanges that would take place as a result of reunification, adding that he was willing to provide land for those who are willing to live in his country community.

However, Stephen Ibelli, Public Affairs Officer at the US Consulate General in Lagos, said the club came to Nigeria to mark the 50th anniversary of its first visit to Nigeria in 1972.

He also stated that the club will be touring through the states of Abuja, Enugu, and Lagos to strengthen cultural ties between the US and Nigeria through music, art, and film.

“Morehouse College Glee Club, celebrating the 50th anniversary of its first tour in Nigeria, will offer public concerts in Lagos, Abuja, and Enugu. In addition, the group will visit universities and high schools, meet Nigerian students and explore their historical connections with Nigeria.

“The visit to Nigeria in 1972 introduced African music to the glee club tradition and to American choral music in general. Fifty years later, choirs in the United States are singing in the Nigerian language, underscoring the long-term impact of these exchanges.

“The Morehouse College glee club has since learned a variety of songs in Edo, Yorùbá, Hausa and Igbo, including a piece composed especially for them by Igwe Laz Ekwueme, the famous Nollywood actor and University of Lagos professor.

“During the visit, Morehouse College glee club will conduct a dynamic exchange of musical knowledge with the broad spectrum of Nigerian society, singing in the Hausa, Igbo and Yoruba languages,” he said in a statement.

US Ambassador Mary-Beth Leonard also said the visit would strengthen long-standing ties between American and Nigerian higher education and further expand the scope of academic and cultural ties between the United States and Nigeria.

“Cultural exchanges such as attending the Morehouse College glee club will help strengthen the bonds of friendship and collaboration through music and art, and provide Nigerian students with an opportunity to learn about academic experiences in the United States,” she explained.

Many of the Morehouse College glee club student members described their visit as an opportunity to connect with their African roots.

“I love the culture of Nigeria,” said 19-year-old Schneider Grandpierre, a third-year junior student studying music and computer science at Morehouse College, of the trip.

Another student explained that “Reconnecting with other cultural heritage and singing Nigerian music in many languages is such a wonderful and enlightening experience.” She revealed that after the tour, she wants to remain in Nigeria for a while longer.