Abomah the African Giantess: The World’s Tallest Woman in the 1800s 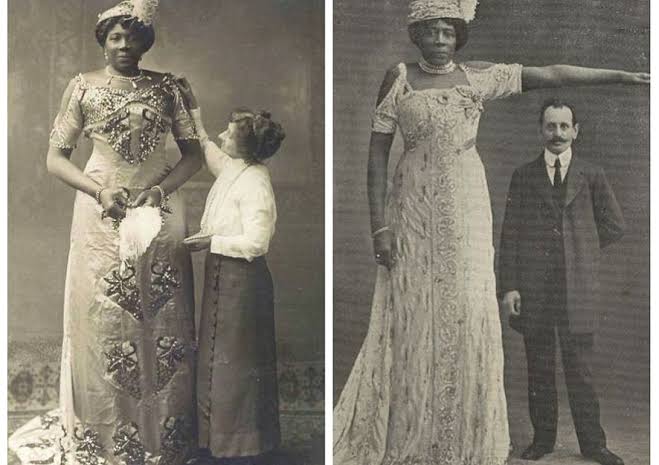 Abomah the African Giantess, was a black woman, recognized for what was tagged an “unusual height.” However, most people do not know who she was and why she was so famous.

Though we call her Abomah, Ella Williams actually chose this title herself. Interestingly, Mme Abomah, her self given title quickly gained traction. It became more popular than her actual name. Ella Williams chose this name as her showbiz identity. A name which she believes captures her characteristics.

The mention of her said characteristics then reminds us of what made her so famous. Abomah was known to have been the tallest and most beautiful lady in Africa and across Europe in the 1800`s and early 1900’s. Speaking of an outstanding naturally given feature, Abomah was reputed to be 7ft 6inch. With this height, it is best to refer to her as a “Giantess.”

Ella Williams was African but was born in South Carolina in USA. This is quite a controversial subject since her show managers claim she is African born in Dohomey. The truth to where she actually hails from is a sensitive one. But one can say quite confidently that she represented Africa as much as she could.

According to her biography, which as stated earlier remains quite controversial, she was born in October of 1865. Formerly known as Ella Grigsby, then Ella Williams, Abomah was luckily born at a time when slavery had just passed. With the introduction of the 13th Amendment slavery became a thing of the past in America, at least in theory at the time.

As a teenager, Ella was already experiencing an interesting physical growth. At the time she went to work for Elihu and Harriet Williams, both of whom, ran a show-business firm of some sort. Historians have noted that she changed the name “Grigsby” because it was the name given to her parents by their slave masters. Soon her incredible height became obvious. Suddenly finding herself as a center of attraction especially as she worked for the Williams. Eventually, she was signed up for a “tour” that supposedly forced her to change her name.

On going for the tour, she realized another Ella (Ella Ewing) existed. Someone else existed in the Show business with that name she favored so much. Like Abomah the African giantess, Ella Ewing was also a giant. However, Ewing had an advantage, she was white. Not only did the clash of names affected her chances of success in Missouri, she was forced to find greener pastures in Europe.

Abomah the African Giantess enjoyed success as she left for Europe. She appeared in several notable sites and one of the most notable sites is her appearance in the 1900 in Liverpool. Other events she has appeared in include; 1901 & ’02 at the Alhambra. Blackpool; 1903 with Reynold’s and later touring Australia. seasons 1904 – 08, touring New Zealand. 1909, South American tour. 1910- 11, European tour; 1912- 13, Reynold’s Waxworks. 1914, touring English variety halls; 1917 Dreamland at Coney Island and Cuba. 1918 with Barnum and Bailey.

While she enjoyed great success, there were periods when she was at her lowest. This isn’t exclusive to her, it is quite usual for every successful persons. For Abomah, she worked as a Nanny at night and a showbiz giant at night.

Read Also; Mwila Tribe of Angola: A Culture Where Women Cover their Head in Cow Dung