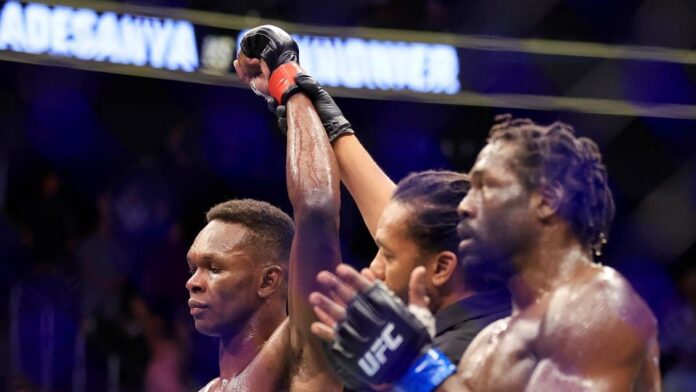 Israel Adesanya has managed to retain the middleweight title with an easy win over Jared Cannonier as UFC 276.

The Nigerian-born champion was barely in second gear during the five-round Main Event as he headed for a fourth title defense.

Although, the Las Vegas crowd seemed unimpressed as they booed the entire fight before the three judges handed the Nigerian victory by a margin of four and five rounds.

“He had an excellent game plan; it was very difficult to do my follow-ups and my second rounds”, reflected the champion before calling rival Alex Pereira, who has two wins ahead of him in kickboxing.

“You know who’s next,” Adesanya continued. “The first time, I told you, it was a mistake on my part. Next time I put you on skates, you’ll freeze to death,” Adesanya confidently remarked.

Adesanya unified the middleweight title with his first win over Robert Whittaker in 2019. Interestingly, his only blemish since his undefeated record was his loss to then light heavyweight world champion Jan Blachowicz two years later.

Meanwhile, Cannonier has won five of his six previous fights with wins over Kelvin Gastelum and Derek Brunson, which secured his title shot.

Adesanya carried an urn to the cage as he paid tribute to WWE legend The Undertaker in his most theatrical of his extravagant performances.

According to analysts, Adesanya took a hard kick approach early on when Cannonier swung and missed with an overhand right.

The champion picked up the pace early in the second round, effortlessly switching stances to land his bumper jab. Just as the Sin City crowd was starting to get restless, Adesanya started to gather his punches before the fight was stopped when Cannonier was poked in the eye.

As seen in the fight, Cannonier’s right eye was swollen by the third round, but the challenger took a more aggressive approach as the title fight reached halftime. He managed to trap Adesanya in the cage, but the champion escaped danger, to win the match.