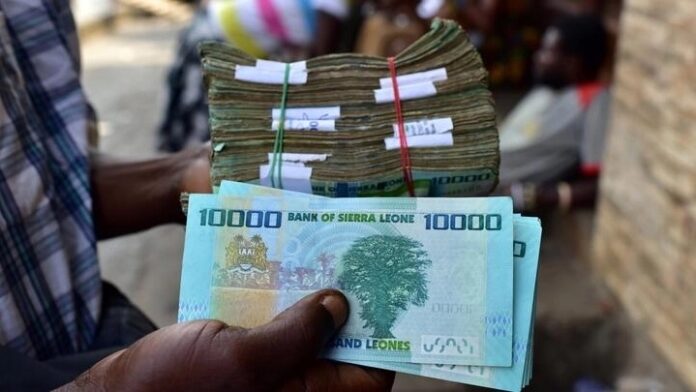 Sierra Leone, on Friday, introduced a new family of banknotes with three zeros removed from the banknotes to restore confidence in the nation’s currency that has since been affected by the rising rate of inflation.

The move was announced last August by the Bank of Sierra Leone, which claimed that the public’s purchasing power would not be altered by the change.

“We removed three zeros from our banknotes, but yesterday’s money has the same value as today,” President Julius Maada Bio said at an unveiling ceremony for the new bills at the country’s central bank.

The nation’s central bank announced its intention to help the country move out of the devastating phase of the increasing inflation rate. It insisted that 10 new leones would be an equivalent of what was 10,000 old leones, with a conversion rate of about 75 US cents.

According to the national statistics agency, Sierra Leone’s annual inflation was 24.87 percent in May, a rate that has seemingly affected its currency negatively as it continues to rise.

Rising prices had spurred the printing of banknotes, resulting in a mountain of paper money that is expensive to obtain and unwieldy for the public.

Buyers need huge amounts of banknotes for the simplest of transactions, and unscrupulous bank tellers sometimes steal banknotes from sealed wads of money.

“We are removing the ‘zeros of shame’ to align the currency properly,” Morlai Bangura, the central bank governor, told AFP earlier in the week. Bangura emphasized the Central bank’s commitment to the transition, stating that the Head Bank had already distributed the new notes to commercial banks across the country.

The transition to the new banknotes has been actively discussed in the country. According to local reports, citizens queued up in banks to change their old notes to new ones despite what many called uncomfortable weather.

“Changing our currency is necessary – we used to carry bags to the bank to withdraw our money but not anymore,” said 70-year-old Alice Frazer, after exchanging her bills at the state-owned Sierra Leone Commercial Bank in the center of Freetown.

As seen in recent images released by the nation’s local media, the newly introduced banknotes are quite similar to the old ones in terms of design and aesthetics.

“Our current currency is too big to fit in a wallet, and we spend too much money to print oversized bills,” Kelfala Murana Kallon, the central bank governor, told reporters last August when announcing the move.

The Sierra Leone economy hasn’t been one that could be said to have been favored over the years. The nation is ranked as one of the poorest countries in the world according to the UN’s Human Development Index.

The West African nation is high dependent on its natural resources. However, its economic structure was affected dangerously by a civil war that lasted from 1991 to 2002 and left about 120,000 dead.

Unfortunately, rebuilding efforts have been set back by an Ebola epidemic in 2014-2016, a drop in global commodity prices, and the coronavirus epidemic—all of which have disrupted trade and investment and hit exports.

According to the country’s central bank, Sierra Leoneans can use both old and new banknotes for a transitional period until September 30th.

The previous currency will no longer be accepted as payment as of October 1. However, until November 15, the public may exchange their old money for new, according to a statement from Kallon.