Thousands Protest The Deaths of African Migrants at Spain-Morocco Border 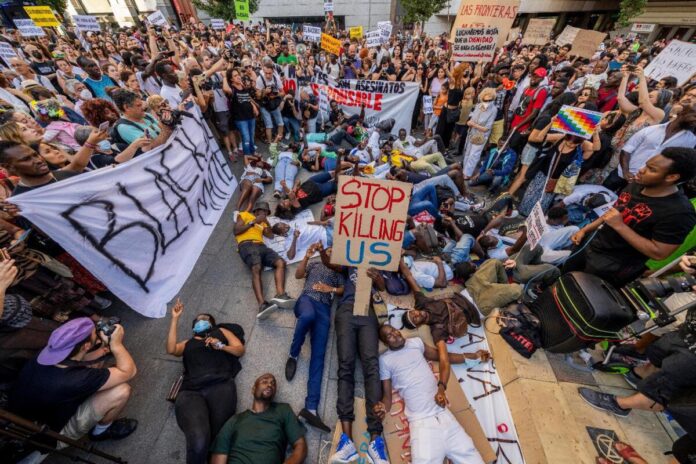 Thousands of people in several Spanish cities protested on Friday over the deaths of at least 23 migrants on the border between the Spanish enclave of Melilla, Africa, and Morocco.

The protest comes amid growing calls for an independent, cross-border investigation into the incident which happened last week.

The demonstrations took place under the name “Las Vidas Negras Importan” in Spanish or “Black Lives Matter” in English.

The unfortunate deaths happened on June 24 while repeated attempts were made by sub-Saharan migrants and asylum seekers to scale the border fence separating the areas.

While Moroccan officials said the migrants died as a result of a stampede, protesters have blamed European immigration authorities and policies.

In Madrid, protesters filled Callao Square holding signs that read “Kill borders” and “No human is illegal.” In Barcelona, ​​participants marched singing against racism and colonialism.

“To protect their borders, they killed many black people,” said Victoria Muñoz, a protester of African descent.

In Rabat, the capital of Morocco, about 40 people held up posters smeared with red paint imitating blood to demand justice for the dead migrants.

“The least we can do is express our indignation and demand that the Moroccan state stop acting as Europe’s border police because, through this shameful activity, it is responsible for what happened last Friday,” said Al-Tayeb Madmadh, a member of the Moroccan party.

Videos and photos that emerged in the days after the killings sparked outrage and condemnation from various human rights groups and officials, including the United Nations Secretary-General.

In a video shared by the Moroccan Human Rights Association, dozens of young Africans can be seen, some lying motionless and bleeding on the floor, as Moroccan security forces watch over them.

In another video, a group of migrants can be seen climbing a fence, some hurling stones at Moroccan riot police who are trying to stop them. At one point, the fence collapsed, causing the migrants to fall from a height of several meters.

“I am shocked by the violence on the Nador-Melilla border,” tweeted UN chief António Guterres this week. “The use of excessive force is unacceptable, and the human rights and dignity of people fleeing must be prioritized by countries,” Guterres added.

Given the “significance and gravity” of the events on the Melilla border, Spanish prosecutors announced that they would launch an investigation “to clarify what happened”.

The Moroccan and Spanish authorities also reported that 140 security agents on the Moroccan side and 60 National Police and Civil Guard officers on the Spanish side were injured.

In an exclusive interview with the Associated Press, Spanish Prime Minister Pedro Sánchez defended the way Moroccan and Spanish police handled the incident, calling the attempt “an attack on Spain’s borders”.

Omar Naji of the Moroccan Association for Human Rights in Nador said they were contacted by the families of Sudanese youths believed to be among the victims, but was not allowed to see the bodies of the dozens of injured migrants being treated at the hospital.