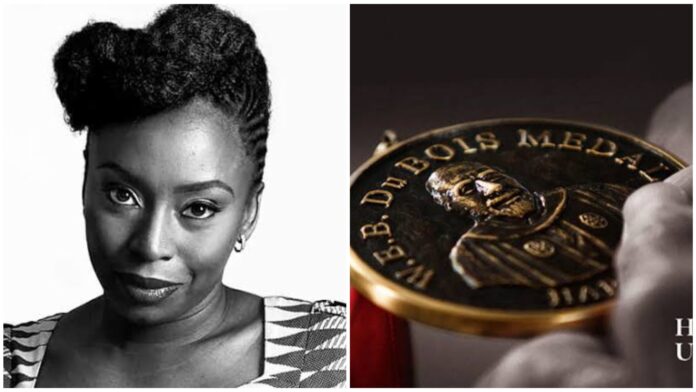 Award-winning Nigerian writer, Chimamanda Ngozi Adichie will receive the W.E.B. Du Bois Medal on October 6. This marks another return to Harvard for Chimamanda, who was a speaker at the 2018 Harvard College Class Day and formerly a fellow at the Harvard Radcliffe Institute (2011-2012).

The Hutchins Center for African and African American Research announced in the Harvard Gazette that Chimamanda, along with six other honorees, will receive the medal as people “who embody the values of commitment and determination that are an integral part of the Black people’s experience in America.”

University professor Henry Louis Gates Jr., director of the Hutchins Center, said in an official statement that this year’s honorees represent “a relentless commitment to pushing the boundaries of representation and creating opportunities for advancement and participation for people who have often been excluded from “great promises of our time.”

Chimamanda has received worldwide recognition for her work, which has been translated into over thirty languages and won numerous awards.

She occupies a unique position that combines a number of qualities. The New York Times’ T Magazine described her in its 2017 Greats issue as “one of the rarest of people: an acclaimed novelist who has also become a leading public intellectual”.

Chimamanda is also a fashion and beauty icon and continually promotes Nigerian designers, including through her “Wear Nigerian initiative.”

She was chosen to be the face of beauty brand Boots No7 and has been featured in numerous fashion publications, including Vanity Fair’s “International Best Dressed List”; and on the covers of British Vogue and Marie Claire Brasil, among others.

Barack Obama called her “one of the world’s greatest contemporary writers”; and Hillary Clinton wrote that “she has a rare ability to quickly and succinctly summarize even the biggest social problems.”

In 2018, she received the PEN Pinter Prize, in honor of the Harold Pinter Nobel Prize, which is awarded annually to a writer of “outstanding literary merit who demonstrates passionate intellectual determination”. She chose to share the Pinter Prize with imprisoned Saudi lawyer and human rights activist Waleed Abulkhair.