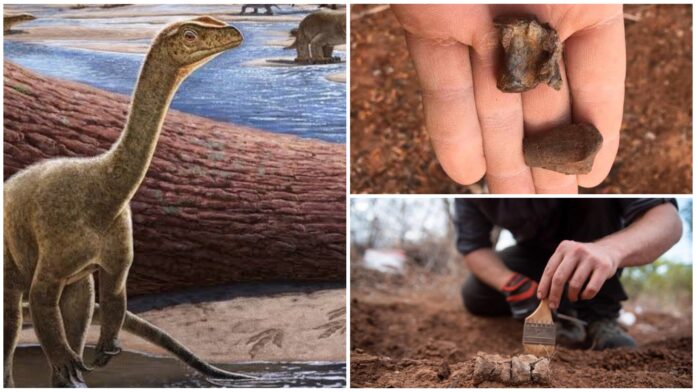 A team of scientists from northern Zimbabwe has stated that they have found the remains of an ancient sauropodomorph (a long-necked dinosaur ) that roamed the Earth around 230 million years ago.

The discovery of the newly named Mbiresaurus raathi, one of the world’s oldest dinosaurs, in this part of Africa would support the idea that dinosaurs were originally confined to a specific climate belt of a single supercontinent.

Mbiresaurus, like other discovered dinosaurs, stood on two legs and had a relatively tiny head, according to the team’s findings, which were published in the journal, Nature. Additionally, it possessed tiny, jagged, triangular teeth, which indicated that it was either herbivorous or possibly omnivorous.

A sauropodomorph, Mbiresaurus is part of the lineage that produced the sauropod dinosaurs, a group that includes Diplodocus and Brontosaurus.

It is estimated that the animal was about 1.82 meters long, had a long tail and weighed between 9 and 30 kilograms.

The skeleton – amazing, almost intact – was only missing part of the hand and parts of the skull. It was first found by Virginia Tech graduate student Chris Griffin and other paleontologists during two excavations in 2017 and 2019.

The discovery could help explain the migration and distribution of the first dinosaurs at a time when today’s continents were connected and formed a supercontinent – Pangea.

At the time, the theory was that latitude and climate controlled the distribution of these dinosaur species, rather than the continental differences that emerged later when continents broke apart.

For this to be true, scientists would expect the type of skeleton previously found in deposits in South America and India to also be found in south-central Africa. At that time, all three parts of the world were on the same latitude as Pangea.

Griffin, who is currently a postdoctoral researcher at Yale University, and his group focused on northern Zimbabwe in particular because it shared a temperature zone with southern Brazil and India during the Late Triassic era, when the animals would have existed.

“These are the oldest definitive dinosaurs in Africa, roughly the same age as the oldest dinosaurs found anywhere in the world,” Griffin explained.