All you need to know about Mount Kilimanjaro; the highest mountain in Africa

Africa is known all over the world as a continent that processes great wonders, not understandable to human existence.One of the great wonders of this great continent is Mount Kilimanjaro.

The mount Kilimanjaro is an inactive volcano in Tanzania. It has three volcanic cones: Mawenzi, kibo and Shira. It is the highest sole free-standing mountain in the world; 5,895 metres (19,341 ft) above sea level and about 4,900 metres (16,100 ft)  above it’s plateau base. It is also the highest mountain in Africa.

The origin of the name Kilimanjaro is not known, but a number of theories exist. It is said that the European explorers had adopted the name in the year 1860 and reported that Kilimanjaro was the Name of the mountain in kiswahili.

In 1885, Jim Thompson claimed that the term Kilimanjaro; “has generally been understood to mean” ‘the mountain(kilima) of greatness(Njaro). He also suggested that “though not improbably it may mean “the white mountain.”  Njaro is an ancient kiswahili word for shining. The Kilimanjaro is a major climbing destination, because of its shrinking glaciers and ice fields, which has been projected to disappear between 2025 and 2035. 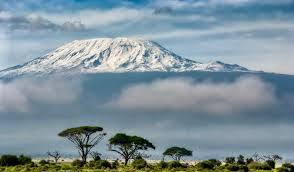 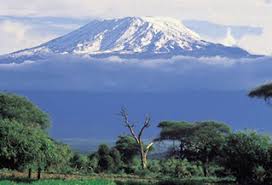 Facts of the mount Kilimanjaro

The machame route is regarded as one of the best, and most popular route to the summit of mount Kilimanjaro. This trail offers great and stunning views, enough time to acclimate. The route is nick named “wiskey route.” It is often distinguished as being tougher than the marangu route, which is also know as the “coca-cola route”.  However the Machame trail is open to camping, which enables trekkers to sleep in tents all the way to the summit.

Climbing Kilimanjaro through the machame route offers a seven day climb or a six day climb. The six day variation combines days four and five, going from Barranco camp to Barafu camp without staying at Karanga. You skip Karanga camp.

Hiking: 6-7 hours Ascent to the summit, then 6-9 hours of descent

Mount Kilimanjaro national park was built in 1973 to protect the mountain above the tree line as well as the six forest corridors that extend downslope the montane forest belt. Large animals e.g. buffalo, antelope, monkeys and elephants roam the Southern slope of the forest.