American Rapper Rick Ross, says he is enjoying Nigeria as he speaks the Local Language in a viral video 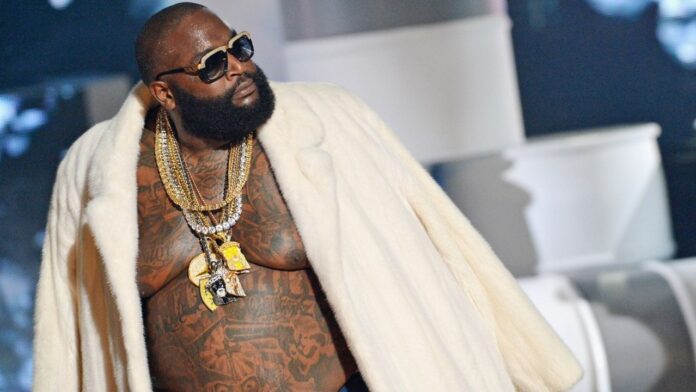 46-year-old African-American rapper, Rick Ross visited Lagos Nigeria, a few days ago.  The record label mogul went on to openly declare his love for Nigeria by saying “I’m having a good time so mo ni fe Nigeria, that’s from the biggest”. “Mo Ni Ife Nigeria” is a yoruba language that translates to “I Love Nigeria” in English.

The statement which has since gone viral, won the heart of so many Nigerians and Africans alike, especially because it was partly expressed in Yoruba – “mo ni fe Nigeria” which means, “I love Nigeria.”

His statement has further made it obvious he enjoyed the hospitality he received so far since his arrival.

During his visit to Nigeria, a show was organized in his honor and he performed alongside top Nigerian artists and entertainers such as; Davido, Tiwa Savage, and many others.

Ross has a history of making music with artists from the motherland. He did a remix song with P-square “Beautiful Onyinye” in 2011 and also made a song with Tanzanian super star, Diamond Platinum titled “Waka”.

Following his heartwarming video, Nigerians reacted in elation; with some social media users opining that Rick Ross be given a Yoruba name.

unwana_kingz said: “Why won’t you love Nigeria when you have tested our jellof rice.”

itz_omowunmii said: “Yoruba us the sweetest language no cap.”

dalabian19 said: “Yoruba is the easiest language to understand if u don eat eba.”

sound._god said: “It’s his ameriBENIN accent tonation mixed with ojuelegba n Akure with a little sprinkle of Ogbomosho for me.”

The rapper is currently in Angola at the time of this report and would be returning to Nigeria, but this time in the Capital city of Abuja; for a show on the 18th of April.

Share
Facebook
Twitter
Pinterest
WhatsApp
Previous article
Meet Iddris Sandu the 24-Year-Old Tech Genius Behind Algorithms that Have Made Uber, Snapchat, and Instagram
Next article
Tanzanian Ruby, Burj Alhamal, One of the Biggest Rough Rubies in the World, Goes Public for the First Time in Dubai