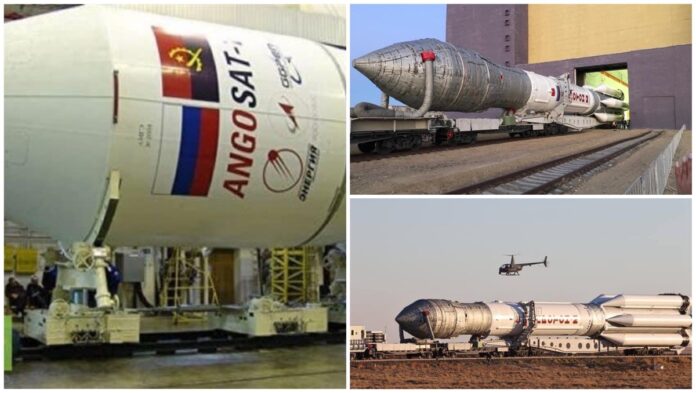 Angola has launched its second communications satellite, Angosat-2. The satellite was launched aboard the Proton-M Blok DM-03 rocket at the Baikonur Cosmodrome in Kazakhstan.

Data released by the Angolan Press Agency (ANGOP) showed that the satellite has seven times the transmission capacity of AngoSat-1, which had 16 C-band and six KU-band relays.

The 15-year AngoSat-2 has six C-band transponders; 24 on the KU band and such a device for the KA band, the report said.

One of the high-speed satellites, AngoSat-2, has a total weight of two tons and should provide 13 gigabytes in each illuminated region (satellite signal coverage areas), added Angop.

The Proton rocket, topped by the Angosat-2 spacecraft, lifted off from the Russian-led Baikonur Cosmodrome in Kazakhstan at 11 am EDT (1500 GMT; 6 pm Moscow time) on Wednesday.

Angosat-2 is aiming for a geostationary orbit around 35,800 kilometers above Earth, where it will provide communications services to the Angolan government for at least 15 years if all goes according to plan.

Angosat-2 was built by Russian satellite manufacturer ISS Reshetnev, according to RussianSpaceWeb.com, with Airbus providing the communications payload. The satellite is a replacement for Angosat-1, which failed shortly after launch into Earth orbit in 2017.

Angosat-2 has its own problems to contend with. The launch was delayed, for example, by the coronavirus pandemic and economic sanctions against Russia, which delayed the development and delivery of the satellite’s main components, respectively, RussianSpaceWeb reported. And then came the Russian invasion of Ukraine, which began on February 24th.

In the wake of the ongoing hack, “Airbus has discontinued shipments of 57 waveguides and associated documentation for the deployable antennas operating in the Ku and C bands,” wrote Anatoly Zak of RussianSpaceWeb.com.