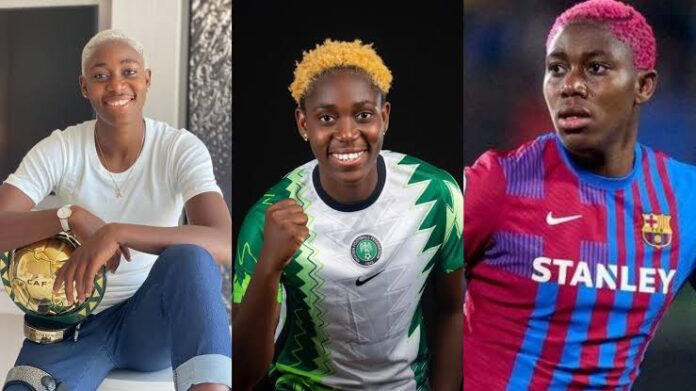 Super Falcons forward, Asisat Oshoala has been nominated for the 2022 Ballon dór Feminine Player of the Year award following her impressive season with FC Barcelona Femini in the Spanish league.

The current Female African player of the Year scored 20 goals in just 19 games to share the top scorer award with Geyse Ferreira.

The 27-year-old’s playing time was limited to three months last season due to an injury, but she showed her quality by scoring goals when she healed from her injury and returned as Barcelona defended the league title.

Lyon’s Ada Hegerberg won the inaugural women’s Ballon d’Or in 2018, while US women’s national team star Megan Rapinoe received the honor in 2019. The COVID-19 pandemic resulted in the 2020 ceremony being canceled. However, Oshoala’s team leader, Alexia Putellas, emerged as the winner after her resumption last year.

The 66th Ballon d’Or ceremony will be held on October 17 at the Théâtre du Châtelet in Paris, France.

The Super Falcons star is set to lead Nigeria to the 2023 FIFA Women’s World Cup in Australia and New Zealand.