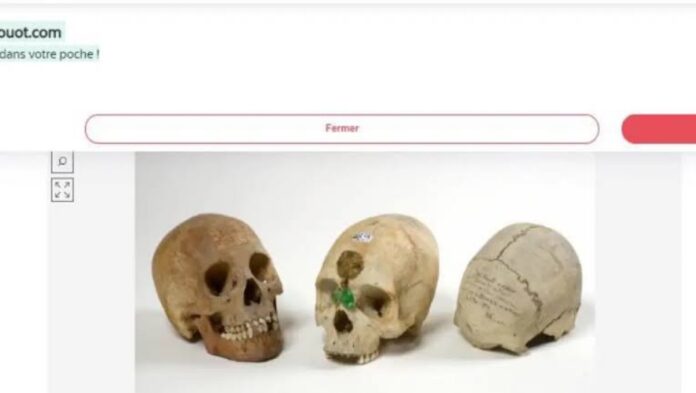 The British Broadcasting Corporation (BBC) reported that an auction house in Belgium was forced to cancel the sale of three skulls of Africans killed during the colonial era in what is now the Democratic Republic of the Congo.

The skulls of people killed between January 1893 and May 1894 were put up for sale at the Vanderkindere auction house in Brussels.

A human rights group called the Collectif Mémoire Coloniale et Lutte contre les Discriminations (CMCLD) has called a demonstration in Brussels to condemn the sale of skulls and for the human skulls to be confiscated by the government and “kept appropriately and with dignity,” the BBC report.

Vanderkindere reportedly decided to withdraw the three skulls (from a private colonial collection) from public sale on December 14.

Vanderkindere Auctions has since sincerely apologized for having put up for auction three human skulls linked to Belgium’s colonial past, which is why they have been withdrawn from sale.

“We in no way condone the suffering and humiliation suffered by the people who are victims of these colonial acts.

“We once again offer our deepest regrets to anyone who has been hurt by the sale of these skulls,’” the auction firm stated.

Belgian Congo was a Belgian colony in Central Africa from 1908 until independence in 1960.

According to reports, assassinations, famine, and disease killed up to 10 million Congolese in the first 23 years of Belgian rule alone, from 1885 to 1960.