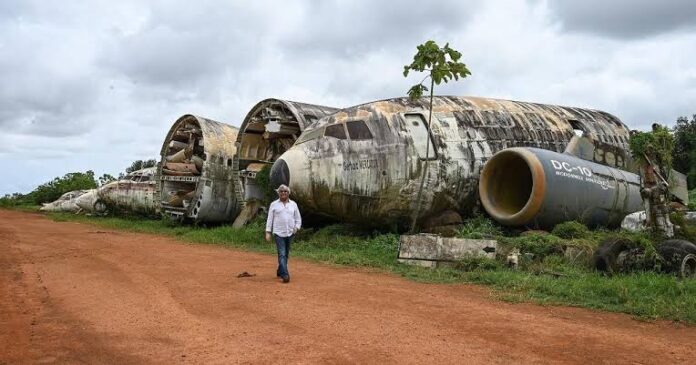 Aziz Alibihai’s idea to turn discarded planes into tourist attractions is making him a sensation among Entrepreneurs in Africa. The Tanzanian-born entrepreneur operates out of Ivory Coast after he moved to the West African country in 1968.

Alibihai, who is now in his 70s, turned his now-famous Songon property, located between a forest and a Lagoon about 30 kilometers from Abidjan, into a home for abandoned and wrecked planes.

According to AFP, the West African entrepreneur has found his calling to be in construction, buying off old planes otherwise tagged “useless” and turning them into something spectacular. His songon property is of course home to these planes, his construction machinery rental company and his football club called, Ivoire Academie.

Alibihai is a plane enthusiast who became convinced that he could turn planes into something beautiful even after their time in the skies runs out. He first got the idea to embark on what has since become a fruitful journey after the Ivorian political dispute of 2010 to 2011.

Recall that this unfortunate event had led to the deaths of 3,000 people and the destruction of infrastructure worth millions. Planes were also affected, they were either destroyed or abandoned due to the conflict.

While the city of Abidjan experienced great damage and its airports were filled with abandoned planes, Aziz Alibihai came up with a plan to acquire these planes not to fly them but to have them converted into tourist destinations. Discussing what it took him to convert these plans, Alibihai told AFP “It cost me an arm and a leg, but I was so excited.”

Alibihai started first by buying of 11 planes from the government, after which he moved them to his Songon property, which was then simply the site of his construction machinery rental company. “Some planes had to be cut into two or three sections to be able to transport them without blocking the whole road,” he mentioned.

Aziz Alibihai is quite knowledgeable about his planes, especially their names. “In total, we have roughly 11 aircraft.” “There’s a DC-10, three Boeing 737s, three Fokker 28s, two Fokker-27s, an Antonov-12, and then there’s the small twin-engine Aztec 23,” he explained.

He described his intention to transform the abandoned planes into tourism attractions. He told AFP, “I’d want to turn them into meeting rooms, a restaurant, and — why not? — luxury bedrooms.” “We can easily adapt them—the cabins have insulation and might operate extremely well with a little air conditioning,” he remarked.

One of the planes he has put together was originally owned by a firm called Electra Airlines. The inscriptions are written in the Greek alphabet. In the former Soviet Union, his Antonov An-12 was a military transport and cargo mover.

Most plane seats have been removed for fans to use on the stands of the Ivoire Academie grounds, according to AFP. Alibhai’s terrace also has some first-class seats.

He has different ideas about how to resurrect his crashed planes. “I’d like to display the airplane components in a kind of museum, exhibiting the planes’ most advanced bits,” he said.

Read also; Benjamin Cadet: Owner Of The Only Company Licensed To Export Cannabis In Uganda