BAL 2022: Cobra Sports Hit Their First Win in The Competition 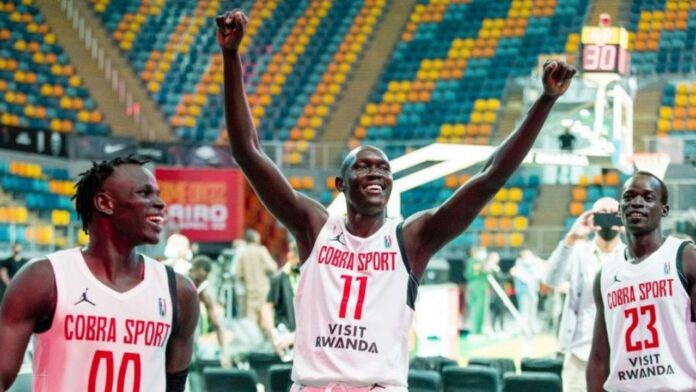 All the disappointment of defeat for the Cape Town Tigers ended last night in Cairo, with the South African franchise finally winning its first meeting in the BAL Nile Conference.

The two teams went blow for blow without ever widening the gap.

With a score of 70-70 just a few seconds from the buzzer, Ganapamo made a masterful three-pointer and the Central African small forward revived the Tigers in the race for the final tournament.

In the other meeting of the evening, a spectacular match took place between the Cobra Sports of Juba and the Congolese of Espoir Fukash.

The South Sudanese franchise won 108-82 just as the Tigers signed off on their first success of the tournament. A special mention goes to Mayan Kiir and Padiet Wang, the game’s leading scorers with 24 points each.

Going down 0-3 in the Nile Conference was never an option for Cobra Sports, who trounced Espoir Fukash 108-82 on Wednesday night in Cairo.

The win boosted Cobra Sports’ aspirations to stay in contention for a Basketball Africa League (BAL) playoff berth in May in Kigali.

South Sudan champions stepped on the floor with a sense of urgency. They moved the ball at such a high pace in the opening quarter that they took shots in less than 20 seconds. Cobra was on a mission to win their first BAL game, and those shots came in a variety of shapes and sizes: pull-ups, floaters, fast-breaks, and even pick-and-rolls.

Kiir later talked about the win. “We don’t want to go home. We had to come out very aggressive and make a statement from the start of the game. I wanted to emphasize a lot of energy and get us going, “he said.

There was no better way to exemplify Cobra Sports’ sense of urgency than the 58-38 halftime lead. They scored more points in 20 minutes on Wednesday than they had in the 92-56 defeat to Petro de Luanda 24 hours earlier.

At that moment of the game, Kiir was Cobra’s propulsor, and, by the end of the opening quarter, he was the only player to score in double figures with his 12 points.

Kiir’s three-point play set the tone for Cobra Sports, who went on to lead by as many as 14 points in the first ten minutes of the game.

With the Cobras in total control of the game, the 24-year-old forward had a breather in the second quarter, contributing just two more points in four minutes.

The DRC champions didn’t start well in this Nile Conference with two defeats in two games and next face the two best teams in the tournament: Petro de Luanda and the defending champion, Zamalek, on Saturday.

Cheered by a group of about a hundred South Sudanese fans inside the arena, Cobra looked like a totally different team from their previous two games, and Fukash couldn’t keep up with the Juba-based team’s rhythm.