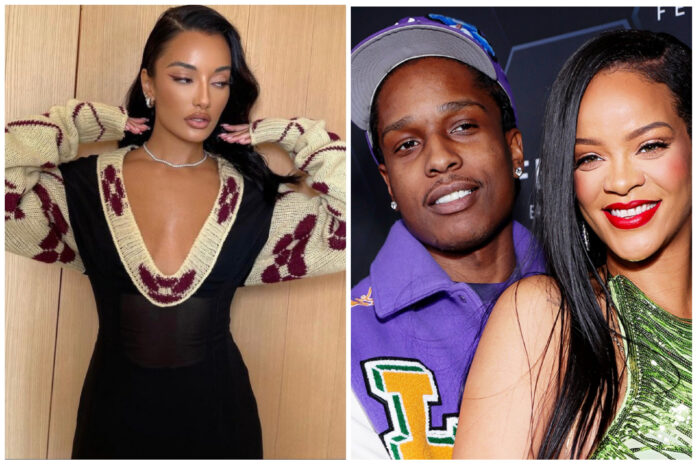 Rumor has it that Fenty boss and Soon to be Mom and her boyfriend; who is also her baby Daddy, Rihanna and ASAP Rocky reportedly end their relationship.

Rumors online are suggesting that Rihanna has allegedly broken up with rapper A$AP Rocky for cheating.

The pop singer, who is currently pregnant with her first child allegedly caught ASAP Rocky cheating with Fenty footwear designer Amina Muaddi, according to Kurro, a prominent Hollywood tabloid.

Kurro affirmed the following: “Rihanna and ASAP Rocky are rumored to have broken up.”

“Apparently, Rihanna dumped him after discovering he was having an affair with Fenty footwear designer Amina Muaddi.”

Rihanna and ASAP Rocky made headlines together when they announced they were having a child together in February 2022.

Also, According to a Twitter user, the SavageXFenty Beauty boss broke up with her rapper boyfriend after she caught him cheating with designer, Amina Muaddi. This supposedly went down during the Paris Fashion Week.

As expected, Twitter has erupted in an uproar of disbelief at the news which is yet to be legally confirmed by either party with Rihanna trending on the number 2 spot at the moment.

Share
Facebook
Twitter
Pinterest
WhatsApp
Previous article
“Send your daughter away and forgive your husband” Nigerian Women Give Shocking Advice to a Woman Whose Husband Raped Their Daughter.
Next article
BAL 2022: Cobra Sports Hit Their First Win in The Competition