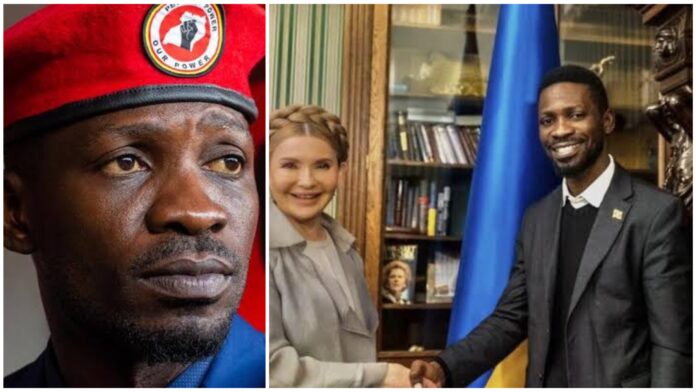 Ugandan singer and politician, Robert Kyagulanyi Ssentamu, better known as Bobi Wine, expressed his solidarity with Ukraine after its invasion by Russia in February 2022.

“In Kyiv-Ukraine to express solidarity with the Ukranian people and leadership against Russia’s war of aggression and occupation. If the dictators stand by each other, the democrats should stand by each other too. It’s dangerous but noble,” Bobi Wine posted on his social media platforms.

Also, read; Benin Bronzes on Display in Berlin for Last Time Before Repatriation to Nigeria

He revealed that they discussed the global impact of the Russian war in Ukraine and its far-reaching implications for Africa, particularly food and commodity prices.

“Africa’s Role in Ending the Crisis and Future Relations with Ukraine. Ukraine is on the front lines, but the rest of the world is at war,” said hitmaker Mr. Kataala.

It is worth remembering that the singer had planned musical concerts to raise money for Ugandans imprisoned in Arab countries.

According to Wine, hundreds of Ugandans are stranded in the Gulf and have no help getting home despite being mistreated by their bosses.

The politician said that the first show will be held on October 8 at Abu Hail Club Stadium in Dubai and the second on October 9, 2022 in Abu Dhabi at Villagio Hotel and Resort.

He urged his fans to come to the show in large numbers so that they can raise a large amount of money, saying the number of Ugandans detained in these countries is huge.