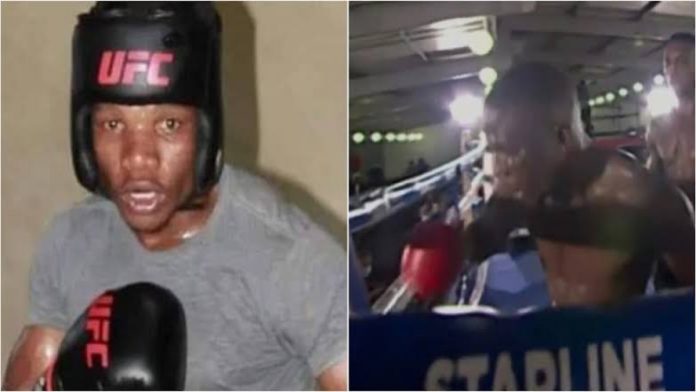 Simiso Buthelezi, a South African boxer, died just days after becoming disoriented in the ring and attempting to attack an imaginary opponent.

Buthelezi turned towards the vacant far corner and began hitting thin air just seconds into the 10th round of a WBF African lightweight title battle against Siphesihle Mntungwa, having knocked his opponent down through the ropes. Buthelezi seemed disoriented and confused leading the referee to abruptly stopped the fight.

Immediately, as it seemed obvious that the fighter was affected negatively, he was transported to King Edward VIII Hospital in Durban and placed in an induced coma. Unfortunately, he died on Wednesday after suffering a severe brain bleed.

Boxing South Africa, which verified Buthelezi’s death, has claimed that it will launch an independent medical assessment of the injury and make the findings public, especially as the circumstances of the death becomes worrisome for African Sports enthusiasts.

According to a statement signed by the boxer’s family, they explained that both the Boxing South Africa and the Buthelezi family are “deeply saddened to announce the death of Mr. Simiso Buthelezi, who died last night, June 7th, 2022, in a Durban hospital.”

According to the statement, “On June 5, 2022, Mr. Buthelezi engaged in a boxing match hosted by Starline Boxing Promotions in Greyville, Durban. Mr. Buthelezi collapsed near the end of his session and was transported to the hospital, where it was discovered that he had sustained a head injury, resulting in an internal hemorrhage.”

The statement further revealed that “Mr. Buthelezi was given the best care available in the hospital, but he died of his injuries last night, as previously stated. Boxing South Africa will conduct an independent medical examination of the injury and make the results of that examination public.”

“While mourning the demise of this great boxer who was exceptional both outside and inside the ring, Boxing South Africa and the Buthelezi family urge that members of the public and the media allow them room,” The statement revealed.

Read also; Egypt Currently Has The Highest Number of Infrastructural Projects In Africa