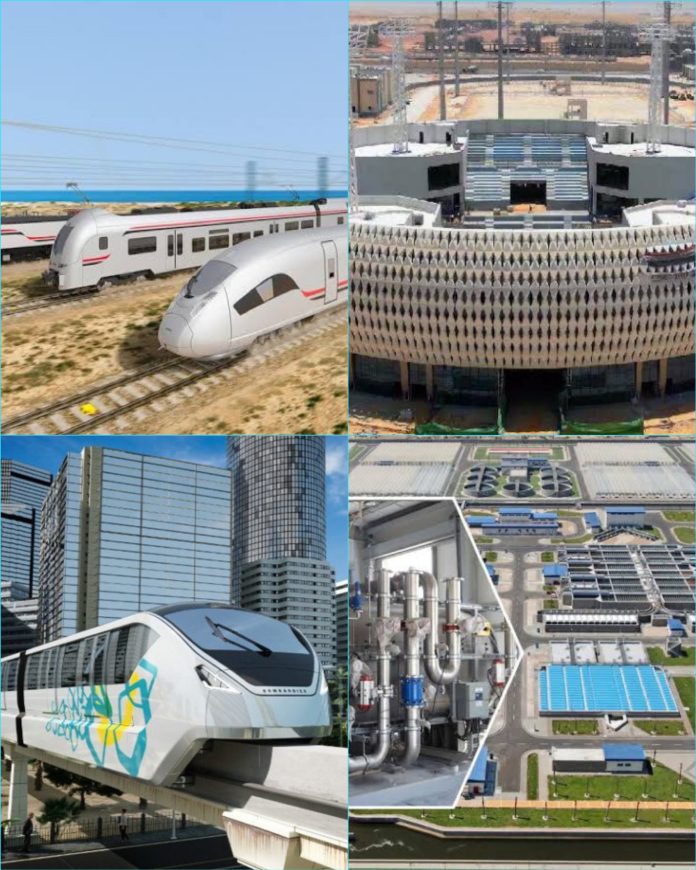 The development process in Egypt has seen an exceptional rise in the past few years. This exceptional rise has made Egypt the African country with the highest number of ongoing infrastructural projects grossing billions of dollars.

There are several projects of interesting magnitude that are aimed at making the North Eastern nation an incredibly good competitor in the global infrastructure conversation. For instance, On June 23, 2021, Orascom Construction and The Arab Contractors (Osman Ahmed Osman & Co) (both Egyptian companies) completed the world’s largest water treatment plant, Bahr El-Baqar Treatment Plant, in Sinai Peninsula, Egypt, with a capacity of 64.8 m3 (ca. 2,288 cubic feet ft3) per second.

The Bahr El-Baqar Water Treatment Plant produces 2,044,000,000 m3 per year and also provides a long-term solution for pollution recovery and irrigation water supply (by recycling the water from the Bahr El-Baqar drain), while also protecting the environment and providing enough water to support the cultivation of 400,000 feddans in Sinai. The total footprint of the Bahr El-Baqar treatment facility is 650,000 square meters.

As exciting as the news of the water treatment plant sounds for the seemingly “growing Economy,” it is only the tip of an Iceberg of the Infrastructural development currently going on within the country.

According to reports, the land of the Pharaohs as it is often called, is currently embarking on a project aimed at creating more value for sporting activities within Africa. This project is called the Egypt International Olympic City. The multipurpose venue, which has a capacity of 93,440 seats, is expected to replace Cairo International Stadium as Egypt’s next national stadium.

It will be Africa’s second-largest stadium, behind the FNB Stadium in Johannesburg, South Africa. The arena is being constructed in the New Administrative Capital, a massive urban project that has been under construction since 2015 and aims to build a new metropolis from the ground up 45 kilometers east of Cairo, Egypt’s capital.

Of course there is the ‘Monorail’ which is one of Egypt’s most eagerly anticipated national projects, with the goal of providing Egyptians with a fast, comfortable, safe, and environmentally friendly mode of transportation, as well as the first public transportation vehicle connecting the New Administrative Capital and 6th of October City to Greater Cairo. The Monorail is set to become the longest in the world, a record-breaking achievement indeed.

With a capacity of 107,000 worshippers, the Egypt Grand Mosque in the new administrative capital is one of the world’s largest mosques. Its minaret will rise to 140 meters in height. It has a variety of large halls for festivities, events, and areas for men, women, and children to recite the Quran. It also features 3,000 automobile parking spaces and a multi-story car park.

Also, Egypt is increasing sugar beet planting to increase domestic sugar production. This is due to the fact that sugar beet uses less water than sugarcane. Considering this statistics, Sugar beet cultivation in the country has climbed to 584,000 feddans (606,099 acres) from 485,000 feddans in 2018.

This is where Canal Sugar comes in, a subsidiary of Dubai-based Al Khaleej Sugar Refinery, supporting Egypt’s initiative by constructing the world’s largest beet sugar refinery in Egypt, with a 900,000-ton annual output capacity. Egypt will be able to eliminate up to 80% of its sugar deficit as a result of this.

Egypt is also getting a new high-speed rail route, that will become the sixth largest in the world, with developer Siemens Mobility claiming it would connect 60 cities across the country.

The infrastructure is expected to be fitted with Trains with a top speed of 230 kilometers per hour that will run from the Red Sea to the Mediterranean, among other locations, on the completely electrified lines.

Read also; Despite The Bias, Two Africans Created a Startup Now Worth Billions