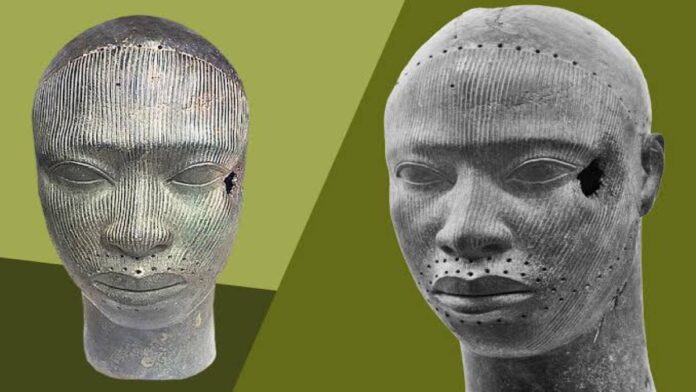 The British police have continued to hold on to a stolen Nigerian artifact (Ife Head) as Nigerian authorities and a Belgian antiquities dealer fail to “agree” on its return.

The “Ife head” was stolen from the Jos Museum on January 14, 1987, when thieves broke into the museum, severely beat the guard, and took away nine of the museum’s most valuable artifacts.

The Ife Head is a cast bronze head from the ancient Kingdom of Ife believed to be around “700 years old” and according to reports, only 20 of them remain.

According to a BBC report, a local Belgian antiques dealer acquired the artifact on 14 November 2007 at an auction of confiscated art objects organized by the Belgian authorities.

Little did he know at the time that the artifact was stolen from Nigeria, especially as it was being sold by the Belgian government.

The antiquities dealer has refused to authorize the repatriation of the bronze head to Nigeria and has insisted on being paid. However, the Nigerian government insists that it will not pay for what is originally hers.

According to the BBC, a Nigerian delegation met the antique dealer in 2019. “I told him he could be an international hero. He said he wanted money, not people saying nice things about him,” Babatunde Adebiyi, an official at the National Museum, told the BBC.

BBC also reported that the dealer had earlier asked for 5 million euros, but eventually lowered the price. British sources now claim that he is asking for €39,000 (£33,500).

In 2017, the dealer tried to sell the Ife head through Woolley and Wallis, who fortunately passed it on to the British police.

Soon, the police took the artifact to the British Museum, where curators confirmed its authenticity by comparing it to a cast made in the late 1940s. “I’m confident it’s real,” said an expert who saw it.

Despite confirming its origins, British police insist on being neutral. “Whatever our particular preferences, we cannot take property away from an individual,” the BBC said, quoting an official. The official explained that the issue must be resolved between the dealer and the Nigerian government.

Another official stated that while everyone agrees that the artifact was stolen, the Belgian dealer has done no wrong in legal terms. The official mentioned that the dealer had procured the piece at a government sale.