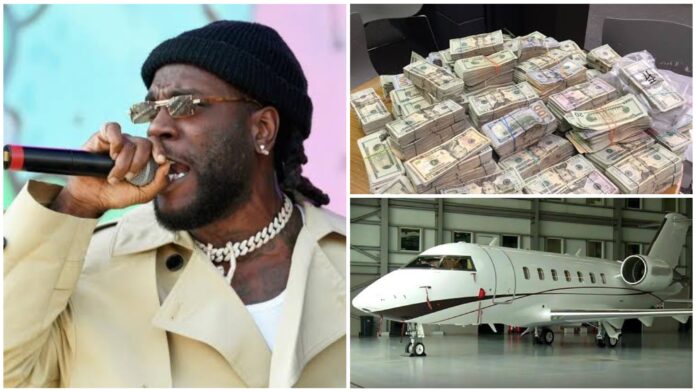 Recent revelation about the earnings of Nigerian singer, Damini Ogulu popularly known as Burna Boy has left his fans excited and some in awe of just how much the singer receives for international shows.

According to Sources, the Grammy award winning singer charges $500,000 per international show.

Show organizers also need to provide a 13-seat private jet, 8 cars, a Sprinter bus and a van to pick him up.

The tweet reads; “Burna Boy charges US$500,000 per international show, providing a 13 seater private jet, 8 cars, a Sprinter bus and a van to pick him up, 10 quality hotel rooms, executive suite for smokers. Your room must have a Hennessy, Jack Daniels, champagne.”

Many commented on how the singer deserves the luxury treatment in the site’s comments section.

The singer, who has performed several sold-out shows this year has praised himself in various occasions, explaining why he believes he earns more than any other artist in Africa.

On his verified Twitter page, Burna Boy bragged about how he performed across most of the country even while he was an upcoming artist.

Asia, Australia and South America are on his wish list. If the singer were to tour these countries, he would undoubtedly make history.

“And by 2022 I would have performed in almost every country in the world. Once I toured Asia, Austria and South America, I really got everything right.”

This came days after Burna Boy broke a new record.

The singer, who never fails to make Nigerians proud and makes history, has added a new achievement to his many achievements.

Burna Boy gave many American artists a run for their money when he sold out a 21,000 seat capacity at the State Farm Arena in Atlanta, USA.

With his new achievements, Burna Boy became the first African artist to sell out all of his shows in America.