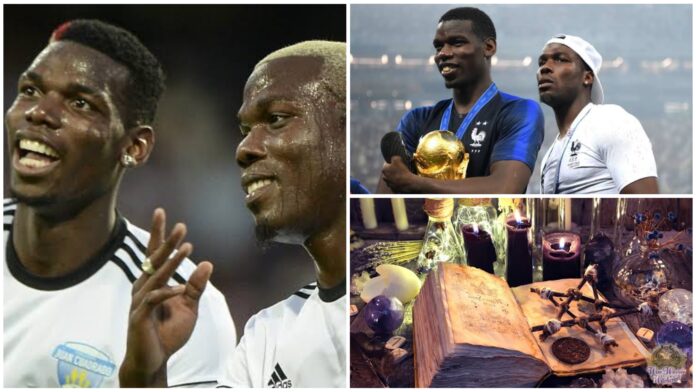 Mathias, the brother of renowned football/soccer star Paul pogba, has taken to social media to respond to allegations that he was a key figure involved in the €13m extortion attempt from the Juventus midfielder.

Mathias accused the Juventus star of Witchcraft while claiming that he has more explosive details to reveal especially as the Midfielder accused him of blackmail. “An alleged Muslim who is deeply involved with sorcery,” Mathias said in a tweet.

Through an explosive post on social media, Mathias claimed that his brother tried to use the media to distort the narrative of the incident.

The following day, the former Manchester United midfielder’s camp revealed that the player had been the target of a blackmail attempt (via Get Football News France).

Paul Pogba reportedly told police that his brother was part of the gang that is demanding 13 million euros from him.

Mathias Pogba defended himself against these claims on Sunday night, claiming that his brother Paul has finally shown his true colors. He said:

“Hahahaha, what I expected has happened: my little brother is finally showing his true colors. Since he was the one who started talking, lying to the police and leaking the information, you can’t blame me. Paul, you really wanted to shut me up and send me to jail, I knew it. Now it’s true, my version of events actually happened and unlike you I have enough to prove my words and your lies.

“I’ll tell you again: brother, manipulating people is no good! It’s not about money: you dragged me against my will, I almost died because of you, you left me in a hole and you want to play innocent. It is said, people will see that there is no greater coward, greater traitor, greater hypocrite than you on this earth.”

“Kylian, do you understand now? I don’t have any negative feelings towards you, my words are for your good, everything is true and proven, the sorcerer is known! Sorry about that brother, an alleged Muslim who is deeply involved with sorcery , it’s never good to have a hypocrite and traitor around.”

Paul Pogba confided in the Organized Crime Squad and allegedly claimed he was caught by childhood friends and two heavily armed, hooded men. The event took place between the 25th and 29th of March, when Pogba visited his family in Lagny-Sur-Marne.

He was reportedly dragged to an apartment in Paris, where the kidnappers demanded he pay 13 million euros for discreetly protecting him for 13 years. The 29-year-old said he saw his blackmailers on several occasions, including in July at Juventus’ training ground, where he reportedly recognized Mathias.