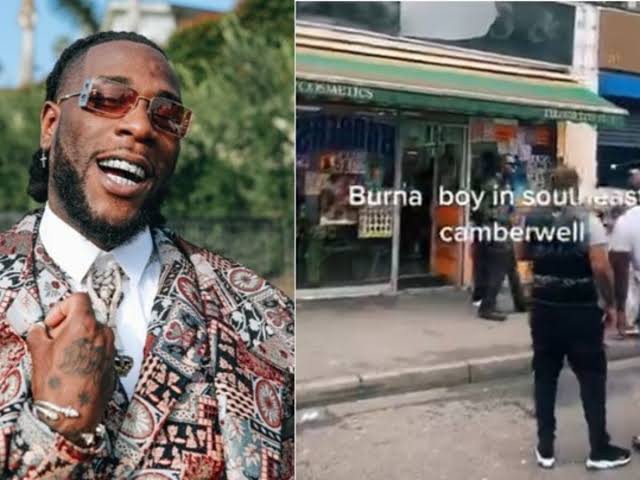 Nigerian singer Damini Ogulu aka Burna Boy is currently gearing up for the release of another music video appealing to his fans and supporters.

The singer was spotted on the streets of London where fans of different races screamed while he shot scenes from his yet-to-be-identified music video.

The singer, who has performed in different parts of the world, appeared to be on a brief hiatus when he was spotted wandering the streets of London on set.

Little did the residents of the area know that the Twice as Tall singer was filming a video in the neighborhood, and it was a pleasant sight when they first met him.

A video showed excited residents grabbing their mobile devices to enjoy some quick fan moments with the Nigerian singer.

Although Burna appeared to be busy with day-to-day business, he paid tribute to the excited fans.

Another video captured the moment Burna walked out of a barber shop during filming and people who had no idea he was in the area immediately tried to approach the scene. Although they were quickly stopped from approaching him by security guards who stood as he continued shooting scenes for his music video.

The singer’s new album, which is named after himself, features a long list of performances from around the world. Its 19 songs draw on a wide range of sonic elements, including Afro-Fusion, R&B, Dancehall, Reggae, Hip-Hop, Pop and more.

A press release states that “Love, Damini” “was written as a personal letter from Burna Boy to his fans. Each track was inspired by significant life events that influenced Burna on the page about a new musical era.”