Zambian Man Fights and Kills Leopard With His Bare Hands 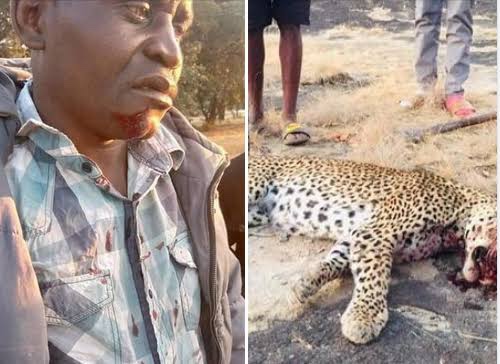 Recently, news of wildlife attacks and injuries caused by said animals has trended on social media. In response to these growing attacks, Africans have since been demonstrating their capacity for self-defense even against wild animals.

A few days ago, a man from Chadiza, Zambia, wrestled and killed a leopard with his bare hands after the wild animal attacked his pets.

The 45-year-old, who fought and killed a leopard that roamed his farm in Chadiza over the weekend, says he wouldn’t dare fight the big cat if he knew initially what he was dealing with.

According to sources, Joseph Banda had to be told it was a leopard. “If I had known a leopard was coming, I wouldn’t have dared hunt it,” he said.

While the nephew, “Govati Banda, initially said Joseph Banda (the farmer) only discovered that it was a leopard that had invaded his farm after it fell from a tree, Joseph Banda himself says it was actually only after he killed the animal that he came to know what he was tussling with,” Zambia daily writes.

Banda was visited by the leopard on Sunday and after fighting, he managed to kill it with the help of his two ferocious dogs. The fight left him with some injuries, enough to keep him in the hospital for a day.

While the news of the Zambian man made rounds on social media, another came to light as the report of a south African man wrestling and killing a leopard all by himself was reported.

According to sources, the South African man, Ndumiso Mona became an overnight hero to many after he bravely fought a lost leopard.

It was a matter of life and death for Ndumiso Mona who was hospitalized after he was confronted with a stray leopard that had escaped from Kruger National Park.

Mona, who suffered multiple injuries from the attack but proved to be superior, had to fight the wildcat with his bare hands.

According to the most quoted part of the News 24 version of the incident, Mona said, “I looked death in the eye, I was ready to punch like a boxer, I told myself one of us should die,” the News24 article said.