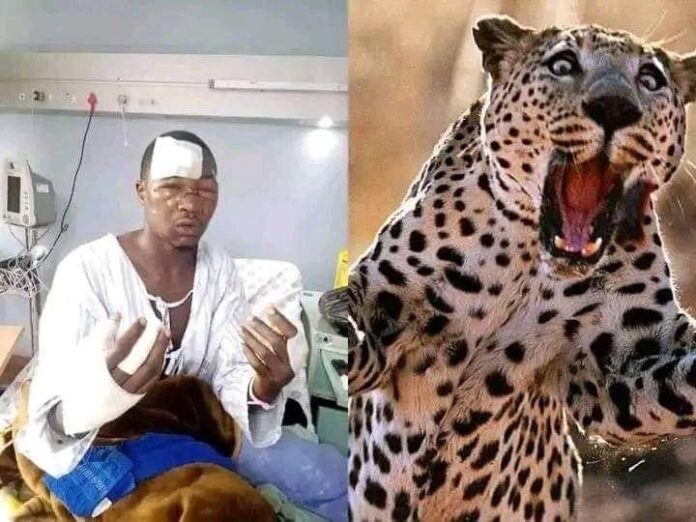 Ndumiso Mona became an overnight hero to many after he bravely fought a lost leopard.

It was a matter of life and death for Ndumiso Mona who was hospitalized after he was confronted with a stray leopard that had escaped from Kruger National Park.

Mona, who suffered multiple injuries from the attack but proved to be superior, had to fight the wildcat with his bare hands.

According to the most quoted part of the News 24 version of the incident, Mona said, “I looked death in the eye, I was ready to punch like a boxer, I told myself one of us should die,” the News24 article said.

Despite being the last survivor of this leopard-human battle, Ndumiso Mona had to be hospitalized after the incident.

He reportedly received medical treatment for injuries to his hands, body and face.

This unusual fight gained traction on social media, with many users ready to crown Ndumiso Mona as the ‘true’ Zulu king.

The sentiment comes after the new king of the Zulu nationality, MisuZulu kaZwelithini, went on a lion hunting trip before his coronation.

In contrast, His Majesty, used a firearm under the protection of his servants and police officers while taking down the King of the Jungle, unlike Mona who used his bare hands.

This is how many reacted to this bizarre incident;

Percival Koapeng said, “Boys fought for the throne in KZN, even the current king had to use a gun to take down the lion, this guy deserves the throne, he killed the leopard with his bare hands.”

Madala Christopher said, “Samson did the same thing to a lion, only for Delilah to knock him down without her using any force.”

To address the issue of roaming wildlife, the IFP leadership in KZN launched a fact-finding mission on Friday, August 26, following an outcry about the wildlife crisis in uLundi.