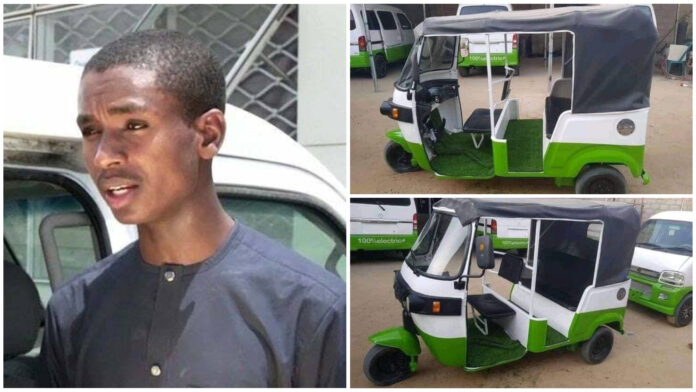 Stunning photos of electric tricycles built by Phoenix Renewable Limited in Maiduguri are making the rounds on social media.

The photos of the beautiful tricycles, popularly known as Keke Napep, got Nigerians talking and asking the government to support the venture.

Mustapha Gajibo, who owns the company that made the tricycle, is known for his electric vehicles, which are mostly buses.

The new Keke products are said to be able to travel 120 km after a 30-minute charge.

He said in a tweet he shared that the cars were made with 65% locally sourced materials. Nigerians have reacted positively to Maiduguri made cars on social media, saying he should improve them.

Governor Babagana Umara Zulum of Borno State has also shown Gajibo Support, encouraging him in his quest to make Made In Nigeria 100% Electric Cars and buses in maiduguri, Borno State.

Many Nigerians took to the comments section of the post shared by Northeast Reporteers on Facebook to voice their opinion.

See some of the comments below:

Akpama Obeten Enang said, “Whoever said Nigeria will not be the envy of nations if we only agree to bury the interests that divide us and then wholeheartedly embrace those that unite us tremendously.”

AbdulGaneey Baba Ajia commented: “Signs of victory because after every war in which the state emerges victorious, it usually follows the industrial revolution. Borno, my beloved state, is born”.

Sampson Oluwarotimi Fabowale commented: “Great innovation. Nigeria on the road to greatness. Congratulations to the engineers for their ingenuity.”

Augustine Sylvester said, “God will continue to expand your knowledge, if the great men of Maiduguri refuse to help you expand, they will not be able to stop God from expanding.”