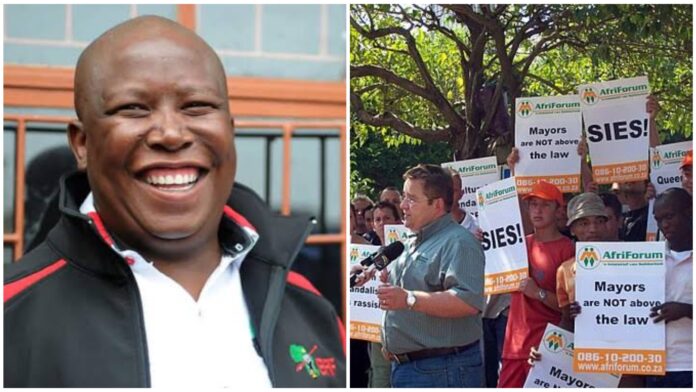 South Africa’s AfriForum has lost its hate speech case against the Economic Freedom Fighters (EFF) for the party’s use of “shooting the Boer”.

The lobby group case focused on around six cases between 2016 and 2019 in which the Dubul’ ibhunu fight song, which translates to ‘shoot the Boers’, was used by EFF party members as well as the leader of the party himself, Julius Malema, in rallies and the like.

The case went to the Johannesburg High Court in June. Judge Edwin Molahlehi announced his verdict on Thursday, the 25th of August.

Scenes of jubilation erupted outside the courthouse, where crowds of EFF supporters had gathered after the verdict.

In the court process, Ernst Roets of AfriForum testified as an expert. However, Judge Molahlehi said in his ruling that an expert’s role is to assist the court and not be biased.

He also said that even from the lobby group’s version, it was clear that Roets was disqualified as an expert on the subject and did not meet the requirements of an expert.

The judge also found that much of the evidence provided by other AfriForum witnesses did not help the court and that the group was also unable to prove that the EFF had violated the Equality Act.

When it came to Malema’s evidence on the witness stand, the judge found no reason to dismiss it. He also accepted the EFF expert’s testimony. With the case going in favor of Malema and his party, the court dismissed the case.

In response to the ruling, Leanne Mathys of the EFF said: “The court ruled that music should indeed be protected under the title of free speech and the debates surrounding that music should be left to the political conflicts in our society.

“The case of these racists who were really trying to erase the cultural element of our liberation struggle in South Africa came to nothing. The historic judgment must be hailed by all progressive forces as a victory over racists.”

Freedom Front Plus said that if the lyrics are found to be legitimate “it could lead to serious conflict and division in South Africa” and that “other groups may be prone to using similarly negative and inflammatory language”.

The AFRIFORUM party claimed that the song “definitely incites violence and that, if declared legal, would lead to an increase in farm attacks and killings”.