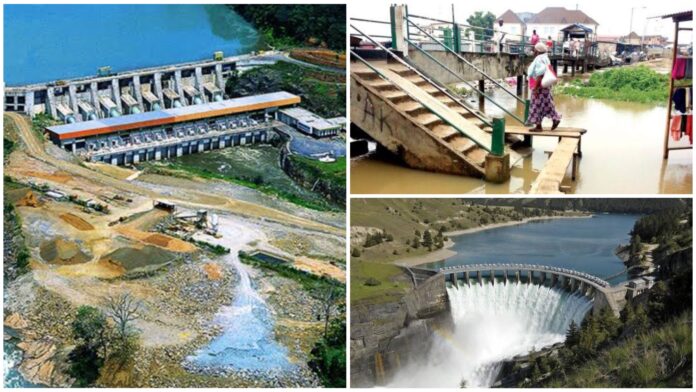 According to NEMA, the release of excess water from a dam in neighboring Cameroon has perhaps unintentionally brought “complications” to Nigeria’s already catastrophic flood disaster.

“The operators of Lagdo Dam in Cameroon started discharging excess water from the reservoir by September 13, 2022. We are aware that the released water will flow through the Benue River and its tributaries to Nigeria, impacting communities existing flooded areas due to heavy rains,” NEMA said in a Sept. 19 statement.

“The released water complicates the situation further downstream, as the reservoirs in the interior of Nigeria … are expected to overflow by the end of October,” he said, adding, “This will have serious consequences for states and frontline communities along the Niger and Benue rivers.”

Kogi and Anambra are among 13 Nigerian states predicted to be inundated by the “combined waters of the Niger and Benue rivers as they enter the region,” NEMA said.

This year’s Kogi floods had a more severe impact on communities than the last major flood in 2012, Abubakar told CNN.

According to the National Inland Waterways Authority of Nigeria, the tide rose to 12.84 meters in 2012, while the last flood measured 13.22 meters.

However, Kogi is not the only state shaken by the devastating effects of recent floods. In neighboring Nasarawa state, which also suffers from flooding down the Benue River, farmers are counting their losses from the devastated land.

More people are dying from flooding in northeast Adamawa, NEMA said. About 37 people have died during the current rainy season and more than 170,000 have been displaced, the agency said.

Many parts of Nigeria are prone to annual flooding, with coastal cities like Lagos being even more prone to seasonal flooding.

Nigerian officials are heeding the call as the country joins its African counterparts in seeking to expand climate finance ahead of next month’s COP27 climate summit in Egypt.

Casualties of The Flood So Far

76 people died when their boat capsized trying to escape the dangerously high tides that engulfed much of southern Nigeria.

The boat with more than 80 people on board capsized in the southeastern state of Anambra on Friday as people desperately tried to escape ceiling-to-ceiling floods.

Recent floods in the region have displaced up to 600,000 people, according to the country’s National Emergency Management Agency (NEMA).

The Lagdo Dam and the Dasin-Hausa Dam

Construction of the Lagdo Dam in northern Cameroon began in 1977 and was completed in 1982.

For starters, Cameroon and Nigeria agreed to build two dams so that if water is released from the Cameroon dam, the Nigerian dam will capture it and prevent it from causing flooding.

To cushion the effects of potential flooding from the Lagdo dam in Cameroon, the Nigerian government has approved the construction of a buffer dam called the Dasin-Hausa dam in Adamawa state.

The Dasin-Hausa dam was supposed to be two and a half years the size of the Lagdo dam, which was built to supply electricity to the northern part of Cameroon and provide irrigation for 15,000 hectares of crops downstream.

Like the Lagdo dam, the dam project in Dasin Village, Fufore Municipality, Adamawa State, was supposed to generate 300 megawatts of electricity and irrigate approximately 150,000 hectares of land in Adamawa, Taraba and Benue States.

Unfortunately, since 1982, the Nigerian government has not yet completed the construction of the Dasin-Hausa dam.

Every time the Cameroonian government releases excess water from the Lagdo dam, communities in Kogi, Benue and the northeastern states are flooded.