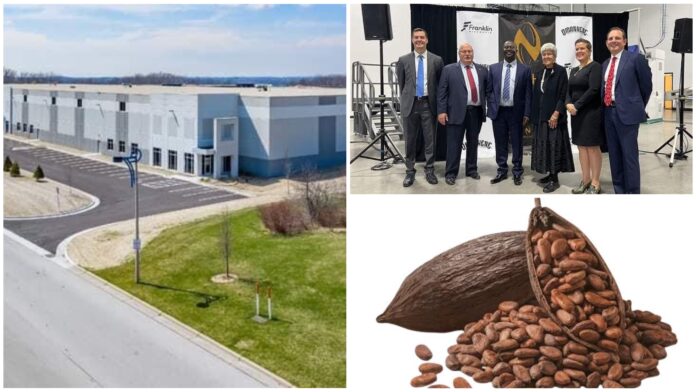 “Niche Cocoa’s historic investment in Wisconsin sends an unmistakable signal to other companies across Africa and around the world – the United States is open for business,” said U.S. Under Secretary of International Commerce Marisa Lago, speaking at the announcement.

Nicho Industria de Cacau, Ltd. based in Tema, Ghana, is the largest cocoa processor in Ghana. It is working with Milwaukee-based Omanhene Cocoa Bean Company on the project.

The Omanhene Cocoa Bean Company, founded by Steve Wallace, pioneered the production of single-origin bean-to-bar chocolate made in Ghana, according to a press release from WEDC.

Also, read; Wizkids “MADE IN LAGOS” sets a record as the longest African Album on World Billboard Charts

“I want to say a big thank you to everyone here. You made this a success story and welcomed us to your beautiful state,” said Niche Cocoa founder Edmund Poku during a press conference on Tuesday.

“The cocoa industry is a $100 billion industry, from which Ghana and Côte d’Ivoire receive $6 billion. As more funds are added, Africans will (benefit from) more foreign investment. (For the United States) will attract foreign direct investment and bring the technical know-how of chocolate processing to the country.

“We believe that if we come here, we will produce some of the best chocolate… We bring the flavor of Ghana to Wisconsin.”

At its Franklin Business Park unit, which is expected to be operational in December or January, the company will use imported cocoa cake and European food processing equipment to turn the brick cakes into cocoa powder.

This powder will then be available for distribution across the country to be used by a variety of food manufacturers for everything from chocolate bars to ice cream.

During a tour of the facility, Wallace explained that the facility expects to process around 1,200 containers of cocoa cakes each year. This cake would travel to the east coast of the US by boat and then be transported by train to Chicago.

“Together, we are creating attractive cocoa products and jobs in the US and Ghana,” said Wallace.