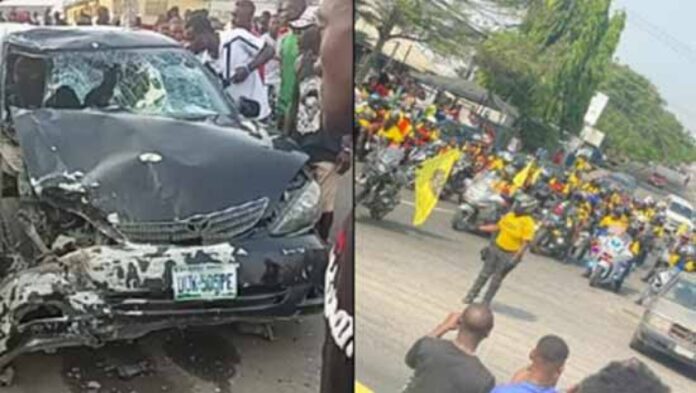 A car plowed into a crowd at a large street festival in southern Nigeria on Tuesday, killing seven people and injuring many others, officials told The Associated Press.

The driver lost control of the vehicle on a busy street in Calabar, capital of Cross River state, as people gathered to watch a motorcyclist parade at the Calabar Carnival, Nigeria’s Federal Road Safety Corps said.

Tuesday’s motorcycle parade is one of the highlights of Carnival, known as one of Africa’s biggest street festivals.

The annual carnival has regularly attracted people from across Nigeria and beyond since it began nearly two decades ago.

Witnesses said thousands had gathered to watch the drivers perform stunts as the car collided with people, scattering bodies and leaving injuries on the road.

Cross River Road Safety Corps chief Hassan Abdullah Maikano told the Associated Press that the vehicle was traveling at high speed as it passed through security.

“The driver of the car lost control and ran into the crowd. The total number of victims was 36; seven died and 29 were injured,” Maikano said, adding that five of the injured were children. He added that the driver survived but was injured.

Cross River Governor Ben Ayade ordered the parade canceled and the driver arrested, according to his spokesman, Christian Ita.

Ita said the governor offered his condolences to the victims and their families and ordered an immediate investigation into the accident.