Celebrating the Work of Martin Senkubuge; the Ugandan Artist Using Art to Educate the World about Vitiligo 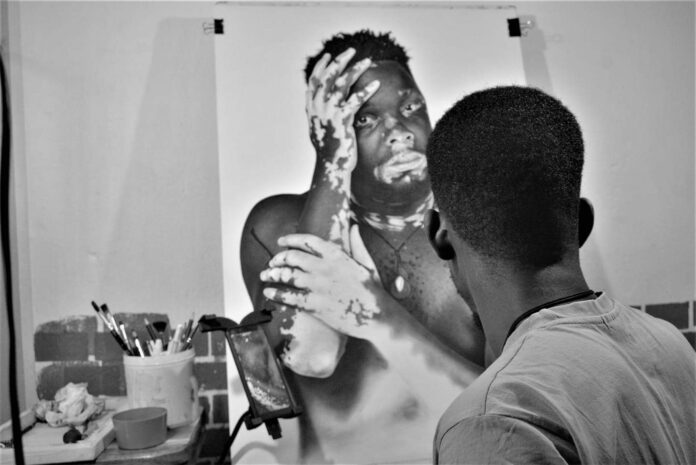 22-year-old Ugandan artist, Martin Senkubuge has ventured into educating the world about Vitiligo skin condition. Vitiligo is a skin condition caused by lack of melanin pigments leading to the pale white patches observed in people suffering from it. In most African societies the condition is highly misunderstood and regarded as witchcraft.

The young man narrates that he decided to create awareness after he was challenged by a client about his own lack of knowledge about the condition.

Explaining the events that unfolded on this particular day Senkubuge recalls the encounter at a collective art exhibition in Kampala in 2019. On the said date Senkubuge had displayed his artwork and “A lady from the crowd wanted to buy my painting, melanin tattoo which was addressing challenges associated with bleaching. She was ready to pay Ushs 1.3 million ($363) but, first, she wanted to know the story behind the painting.”

Senkubuge used the example of American icon Michael Jackson whom he claimed had bleached to turn himself white to answer the lady. This angered the young woman who was well aware of Michael Jackson’s condition and “She immediately got detached from the artwork saying I thought artists make research before they present their work!”

Since then the young talented artist has been moving up and done to create awareness about Vitiligo condition in Uganda and Africa at large. He works with Vitiligo communities in Uganda and the Vitiligo Association of Uganda (VAU).