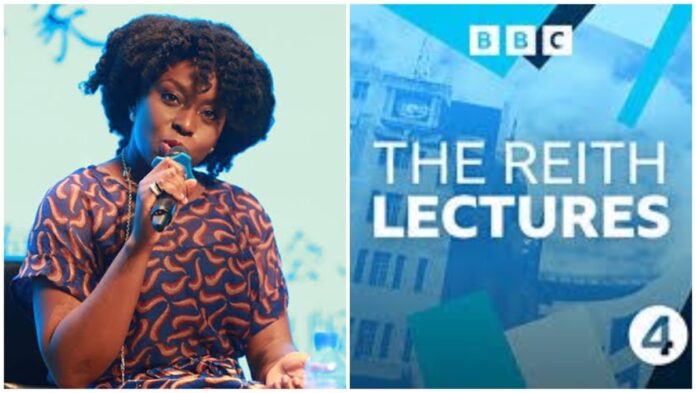 The Reith Lecture was created by the BBC in 1948 to honor the historic contribution to public service, broadcasting by Sir John (later Lord) Reith, the company’s first general manager.

Reith demanded that broadcasting be a public service that enriches the nation’s intellectual and cultural life. With that in mind, each year the BBC invites a leading personality to give a series of radio talks.

According to the BBC, the Reith Lectures have provided insights “into the work of some of the world’s greatest thinkers” over the years.

Other luminaries who spoke include economist J.K. Galbraith; physicist Stephen Hawking; and former Governor of the Bank of England and Bank of Canada, Mark Carney.

Chimamanda’s choice to deliver the prestigious lecture is another honor. She has received worldwide recognition for her work, which has been translated into over thirty languages and won numerous awards and awards.

She occupies a unique position that combines a number of qualities. The New York Times Magazine described her in its 2017 issue of Greats as “one of the rarest of people: an acclaimed novelist who has also become a prominent public intellectual”. She is also widely known as a fashion and beauty icon.

2022 is an important year for the BBC as it marks the 100th anniversary of its founding. To mark its centenary, the BBC has decided to host a series of special freedom talks by four prominent figures, based on a speech by former US President Franklin D. Roosevelt.

BBC Radio 4 controller Mohit Bakaya said: “In this BBC centenary year, I wanted to pursue four perspectives on this complex idea, based on FDR’s famous Four Freedoms Speech – a speech delivered in 1941 at such a time precarious has been realized for the world. I am delighted that these four brilliant thinkers have agreed to explore freedom in terms of their knowledge and experience.”

The lecture will be taped for a live audience at The Radio Theater at the BBC News Broadcasting House in London on 31 October. It will then be broadcast on BBC Radio from 30 November.