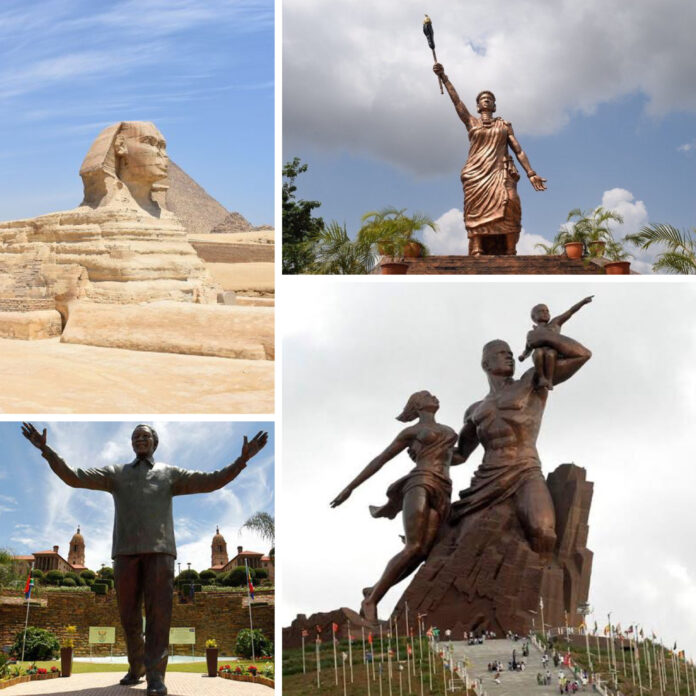 Africans preserve art, history, culture, and legends in a variety of ways. One of which is by creating statues.

African Renaissance Monument tops number one on the list of the tallest statues in Africa.
This statue is located on the twin hills known as Collines des Mamelles, just on the outskirts of the city of Dakar, Senegal.

This statue is actually the tallest statue in Africa and it was created by Senegalese architect Pierre Goudiaby based on a proposal put up by president Abdoulaye Wade and was constructed by a North Korean business, Mansudae Overseas Projects.

On the number two spot on the list of the tallest statues in Africa is The Great Sphinx of Giza, Egypt.

The Great Sphinx of Giza is a huge stone carving of a creature with a lion’s body and a human head.

This statue continues to be the largest building made of a single block of stone. It is carved out of a single ridge of limestone that is 240 feet (73 meters) long and 66 feet (20 meters) high, making it the largest monumental sculpture in all of antiquity.

This is why it is one of the tallest statues in Africa.

The Sphinx was constructed during the reign of Pharaoh Khafre in 2500 BC, according to research.

The Sphinx of Giza, also known as the Sphinx is located on the Giza Plateau, on the western bank of the Nile.

Two enormous stone statues of Pharaoh Amenhotep III, who ruled Egypt in Dynasty XVIII, are known as the Colossi of Memnon (18th Dynasty).

Each statue resembles Amenhotep III and is around 18 meters tall, making them the third tallest statue in Africa.

These statues are located on the West Bank right across the Nile from Thebes.

The Yoruba people hold Queen Moremi in high regard as the personification of valor, knowledge, and sacrifice.

She has been memorialized in a number of ways, including through books about her, public spaces named for her, and perhaps most notably, the Queen Moremi Statue of Liberty, which Oba Ogunwusi constructed in the Ife palace in 2016.

This statue does not only make the list of the tallest statues in Africa but it is also recognized as the tallest in Nigeria.

The statue made of black granite is that of Ramesses II, the third pharaoh of Egypt’s 19th Dynasty.

Since being discovered in 58 parts by an archaeological team led by Mohamed Abdel-Qader in 1958–1960, the statue has only been partially rebuilt.

The statue of Ramesses II is a standing representation of Ramesses that dates back 3,200 years. It was found in 1820 after splitting into six pieces and attempts to repair it to its original height before 1955 were unsuccessful.

Nevertheless, the newly restored statue was unveiled on April 18, 2017 and it can now be found at the Luxor temple.

Mandela has various statues around the world, but the one at the Union Buildings, the seat of government in Pretoria, is the tallest of them all.

The bronze statue honoring the late former South African president and anti-apartheid leader, Nelson Mandela, was built in June 2013 to end the official 10-day period of mourning of the former state president.

The R8-million bronze statue, which stands nine meters tall, is situated near Pretoria’s Union Buildings and is not to be confused with the six-meter-tall Nelson Mandela statue in Johannesburg’s Nelson Mandela Square.

The statue was unveiled at the Union Buildings on December 16, 2013.

The “Jesus de Greatest” monument is the tallest representation of Jesus Christ in Africa, standing at 28 feet.

It is situated in the St. Aloysius Catholic Church in Abajah local government, Imo state, Nigeria.

The statue was carved out of white marble by a Chinese company in 2014 and it was finally unveiled in 2016.