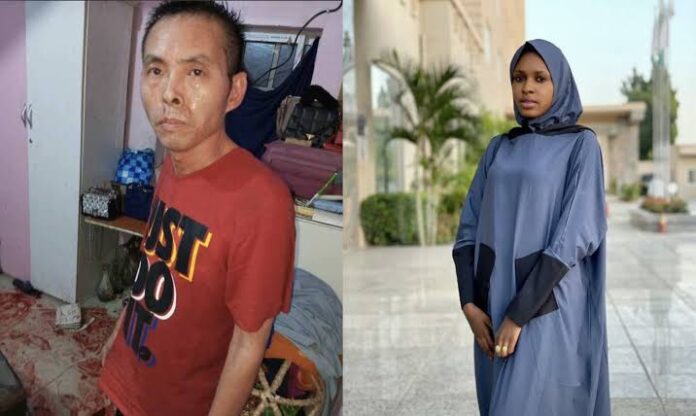 A lady, Ummu Kulthum of Kabuga Quatres, Dorayi Babba in Kano was stabbed to death by her boyfriend, a Chinese national named Geng Quangrong, on Friday night for cheating on him.

Kano Police confirmed the incident through its spokesperson, SP Abdullahi Haruna Kiyawa, who said the suspect Geng, 47, committed the crime after climbing over the fence of the deceased’s building, where he found her and stabbed her continuously to death.

The incident happened around 10 pm on Friday, after the Chinese national supposedly “visited” the lady at her parents’ home, next to the office of the National Agency for Environmental Regulations and Regulations (NESREA).

According to the accused, he said that they were together for 2 years and that he spent a lot of money in millions of naira with the girl and her family only for the girl to stop answering his calls. He said it was jealousy and anger at being abandoned by the girl that made him stab her.

The suspect further stated that he was upset by the deception and decided to attack and kill the deceased in her home.

The police spokesperson further stated that the mother of the deceased raised the alarm during the incident and the police were immediately informed of the development, after which Police Commissioner Abubakar Lawan instructed the DPO, Dorayi Babba, to see to the situation.

Since then, Geng has been transferred to the state headquarters in Bompai for investigation and prosecution.

Meanwhile, the late Ummu was buried in Kano on Saturday morning as family and friends mourn her sudden departure.

After investigations it was revealed that the residency permit given to immigration officers by the accused had been expired for quite sometime.

Sources claim that the accused gave MAKIA immigration officer to help him renew has expired permit.

Interestingly, Geng himself, revealed that he used to transport textile materials from China to Nigeria and deliver them to his employer to help him sell them at Kori Market.

Currently, Geng’s employer claims to be in Turkey but has no idea when he will return to Nigeria. Geng has a 46-year-old wife in China and a 13-year-old daughter, all in China.