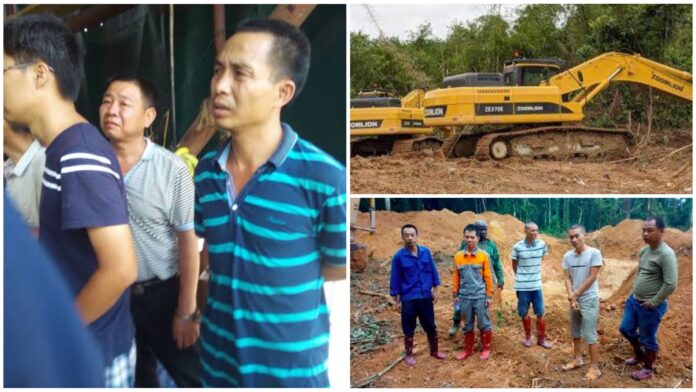 Police in Ghana have arrested five Chinese nationals for illegal mining activities and also in connection with missing excavators in Ellembelle, in the west of the country.

A police statement revealed that the five suspects were arrested during a special operation on the night of September 7, 2022.

This comes after the recovery of one of the excavators and the arrest of five others, including Ellembelle District Manager Kwasi Bonzoh. Mr. Bonzoh was charged with five counts.

The charges he was slapped with are assault, conspiracy to assault, resisting arrest and two others.

He received bail on Wednesday. However, his other four accomplices, who were also arrested, were denied bail.

Below is the full police statement regarding the arrest of the five Chinese nationals:

As part of the ongoing investigation into the Ellembelle excavators, police have arrested five Chinese suspects for their involvement in the case.

An intelligence-led operation during the night of September 7 until dawn on September 8, 2022 led to the arrest of Shi Zhong Qix, Wei Lin Xi, Huang Qian Xi, Li Jian Wen and Huang Qian Sheng from their safe house in Asiama in the Ellembe district of the Western Region.

The Ghana Immigration Service has been contacted for details on their immigration status and their Ghanaian sponsors to assist in the investigation.

As the investigation continues, we would like to assure the public that all other accomplices, both Ghanaians and foreigners, will be arrested and brought to justice.

We want to congratulate Regional and all the teams involved in the operations for their continued altruism and patriotism.