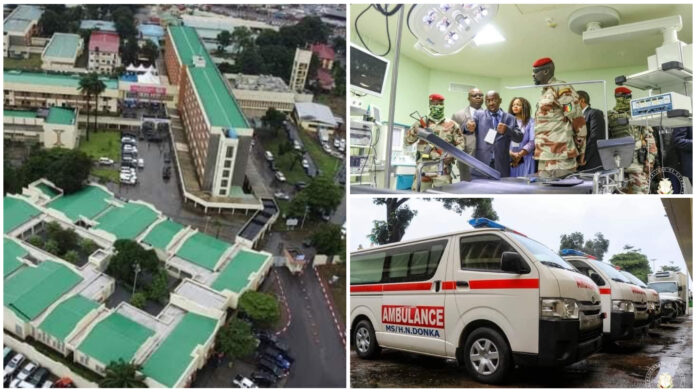 The renovation comes after a drastic reduction of medical facilities in the area and a complete negative turnaround of the health care system in the past few years.

However, the government in fulfilling some of its promises, has, in conjunction with several bodies, worked on renovating one of the most famous hospitals known in the country for its years of health care delivery.

Renovations include; A state-of-the-art category 3 hospital with a technical platform of three operating rooms, three sterilization centers, eight units of medical analysis laboratories and outpatient services, which offers opportunities for impeccable quality care to Guineans and promotes a drastic reduction in evacuations doctors outside the country.

Power in Guinea has been quite contentious as its new military leaders attempted to consolidate power after overthrowing President Alpha Conde. The new government ordered their Presidential Guard soldiers to join the junta’s forces while also preventing government officials from leaving the country.

After returning the West African nation to military rule for the first time in more than a decade, the junta had already dissolved the country’s national assembly and constitution.

Junta leader Colonel Mamadi Doumbouya said the military regime would not seek revenge against political enemies, although he also told officials in Conde’s ousted government to hand over their passports.

“There won’t be any resentment or spirit of vengeance. No witch hunts would be conducted, “declared Doumbouya, who before assuming office, commanded the special forces of the Guinean army. He stated during his speech, that justice will serve as the moral compass for every Guinean citizen.

“Former government officials will not be able to travel outside our borders during the transition,” he said during the short speech. “All your travel documents and vehicles must be handed over to the general secretaries of your former departments.”