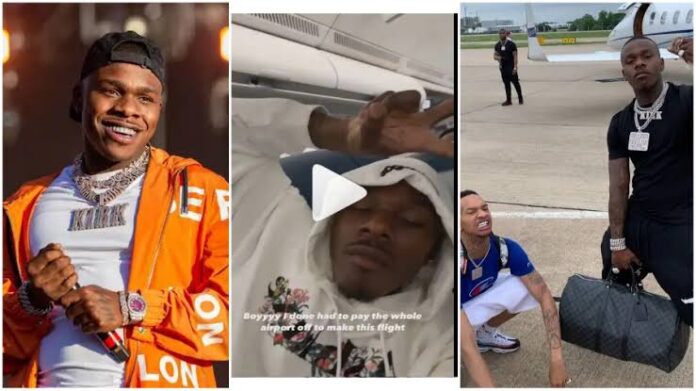 DaBaby alleges he was basically extorted while trying to leave Nigeria. He claimed that he had to pay several people at the Nigerian airport after filming a music video with Davido.

The rapper revealed this via his Instagram stories. He claimed that he had to pay “the entire airport” before he could leave Nigeria.

Recall that the Grammy Award-winning rapper went to Nigeria to film a music video with Afropop artist, Davido.

In an Instagram short video, Dababy posted a video of himself and members of his staff on an aircraft departing Nigeria.

After earlier posting several pictures and video clips of himself enjoying Lagos, Nigeria, the rapper seems to now have an interesting view of Nigeria, especially with his claims of alleged extortion.

Unfortunately, this recent development and the controversial caption on Dababy’s video have raised eyebrows. Social media users have since begun to question the system in place in Nigerian airports.

The caption, which reads: “Boyyy I done had to pay the whole airport off to make this flight,” has made its way into several tweets. Viral posts on the subject have circulated online, portraying a negative view of what many are calling “extortion” at the Nigerian airport.