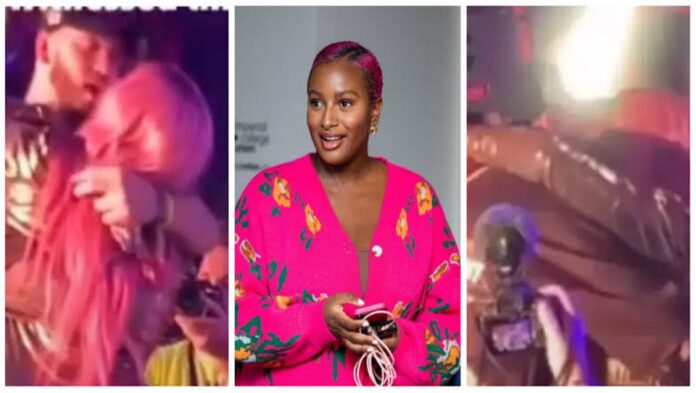 Videos and photos of her engagement to her white boyfriend surfaced online on Saturday, along with dozens of congratulatory messages.

Cuppy can be seen in the video hugging and kissing her partner, a Boxer, and YouTuber, Ryan Taylor after he asked her the famous ‘will-you-marry-me’ question on stage.

DJ Cuppy, one of the daughters of billionaire Femi Otedola, answered in the affirmative, which was followed by two passionate kisses on stage. The audience clapped and cheered for joy at the good news.

Recall that Cuppy had earlier reacted to her sister’s engagement a few months earlier.

She took to her social media platform to respond to the news of her sister’s engagement to famous singer Mr. Eazi.

News of Mr. Easy’s engagement to Temi Otedola broke on social media on Sunday, April 10, 2022, when the couple shared a 38-second video clip on their social media platform in celebration of the occasion.

DJ Cuppy expressed her excitement in a post on her Instagram story; “I’m so happy that my little sister @temiotedola found her personal love and the love of her life. mreazi, I’ve always wanted an older brother. Welcome to the family. PS I introduced you guys…”