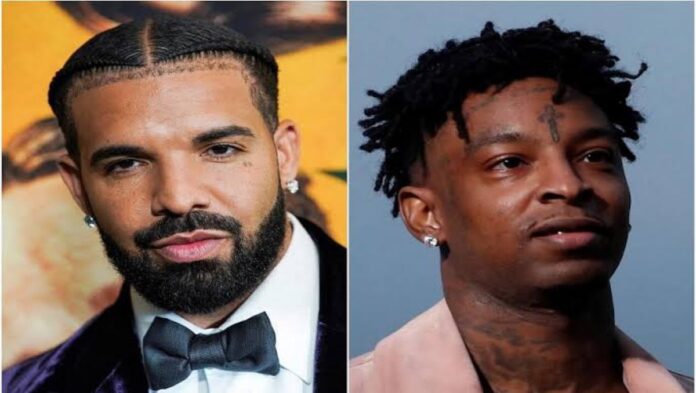 Drake and 21 Savage are being sued by Vogue magazine publisher, Conde Nast for using the Vogue name without permission to promote their new album Her Loss.

Conde Nast, which owns Vogue, says the rapper’s ad campaign, for his more than 135 million social media followers, was built “entirely” on unauthorized use of Vogue trademarks and misrepresentations, which will appear on Vogue’s upcoming cover, with the “love and support” of Anna Wintour a longtime editor-in-chief.

It also stated that the ad campaign was confusing to the public, including the media, who touted Drake and 21 Savage as Vogue’s “new cover stars”.

“Vogue magazine and its editor-in-chief Anna Wintour have had no involvement in Her Loss or its promotion, and have not endorsed it in any way.”

Condé Nast said the defendants also created a fake edition of Vogue that was distributed in major metropolitan areas, accompanied by posters that mimic Vogue’s design.

It noted further that the result of Drake’s actions was an “unmistakable” confusion among the public, including the media, who dubbed Drake, 36, and 21 Savage, 30, the “new cover stars” of Vogue magazine.

Larry Stein, attorney for the defendants, declined immediate comment on Tuesday and has yet to review the complaint.

Conde Nast, also known as Advance Magazine Publishers, is seeking damages of at least $4 million (S$5.6 million) or triple the defendants’ earnings from its “fake” album and magazine.

It also demands punitive damages and an end to all trademark infringements. Its Loss has received mixed reviews since its November 4 release.

Condé Nast said it has repeatedly tried to reconcile his differences with Toronto-born Drake and Atlanta-born 21 Savage since Oct. 31. “The Defendants’ apparent disregard for Condé Nast’s rights left him with no choice but to pursue this lawsuit,” it said.