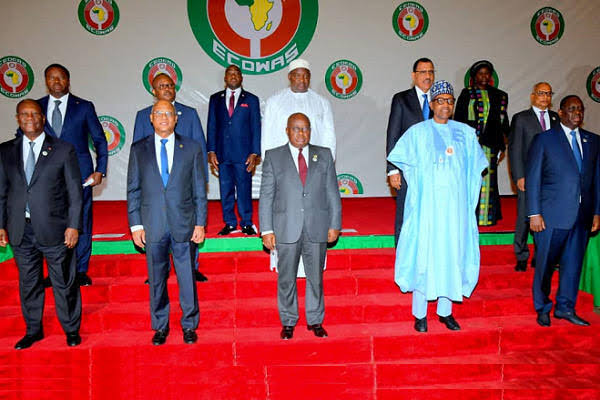 The Economic Community of West African States (ECOWAS) has suspended Burkina Faso following the military coup; which saw the Burkinabe President Kabore Deposed days ago. The Burkinabe army on January 24 arrested President Marc Kabore and later announced that his government had been deposed.

The suspension was decided at a virtual ECOWAS Authority of Heads of State and Government extraordinary session convened to review political developments in Burkina Faso.

According to a draft of the meeting’s resolution; “the authority strongly condemns the coup d’Etat and expresses deep concern over the resurgence of military coups in the region following the coup d’Etats in Mali on August 18, 2020, in Guinea on September 5, 2021 and in Burkina Faso on January 24, 2022.”

A part of the resolution, was the demand for the immediate release and protection of President Roch Kabore; and all the other political detainees who were taken into custody by the army.

The leaders called for the quick restoration of constitutional order by the militaries, urging them to remain republican; by focusing on the role of safeguarding the territorial integrity of the country.

The Committee of Chiefs of Defence Staff (CCDS) will also deploy a delegation to Burkina Faso to hold consultations with the military leaders to carry out an assessment of the security situation in the country and submit a report to be reviewed by the Authority of Heads of State and Government.

The leadership “further instructs the Commission to facilitate the deployment of a joint ECOWAS Ministerial Mission to Burkina Faso, led by the Chairperson of Council of Ministers on 31st January, 2022; to assess the political situation and submit their report to the Authority of Heads of State and Government.”

The Heads of State and Government will, on February 3, convene an Extraordinary Summit in Accra, Ghana; to re-examine the situation in Burkina Faso, Guinea and Mali.