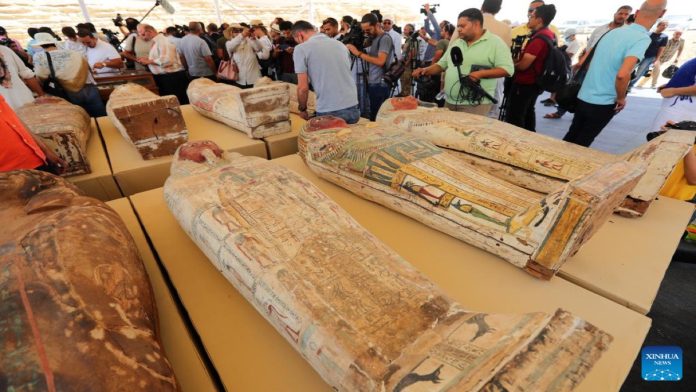 While at the Saqqara necropolis, south of Cairo, officials in Egypt announced a massive new archaeological find of 250 sealed coffins containing mummies.

They also announced the discovery of 150 bronze statues of ancient gods and goddesses, and other amazing treasures as a public display was done earlier on Monday.

According to Mostafa Waziri, secretary-general of Egypt’s Supreme Council of Antiquities, “an Egyptian archeological team working in the Bubastian Cemetery region, unearthed a bronze figure cachette that dates back to the Late Era of ancient Egypt.

Officials reported that the archaeological team discovered the coffins inside several wells on the site. These coffins remain preserved in the same color as they were originally made and are said to be at least 250 in number, with reports claiming that they date back to 500 B.C.

The crew discovered a papyrus with verses from the “Book of the Dead” while excavating one of the wells. According to Waziri, “Combs, eyeliners, vials, bracelets, earrings, and seed necklaces were among the cosmetics discovered, of course, these were simply among several things that were discovered on the site.

The discovery was uncovered during the site’s fourth excavation, which began in April of this year. According to Waziri, September will mark the beginning of the “fifth excavation phase,” by an Egyptian delegation.

Recall that the greatest discovery of 2021, according to the prestigious British daily “The Sun,” is Egypt’s Lost Golden City. According to the Sun, in April of 2021, an Egyptian team led by Dr. Zahi Hawass discovered the metropolis that had been lost beneath the dunes and named it “The Rise of Aten.”

The city is 3000 years old, dating back to Amenhotep III’s reign, and was used by Tutankhamun and Ay.

“Many foreign missions searched for this city and never found it. We began our work searching for the mortuary temple of Tutankhamun because the temples of both Horemheb and Ay were found in this area” Hawass previously said.

Historical records seemingly show that this city was active throughout the great king’s co-regency with his son, the legendary Amenhotep IV/Akhenaton, and was founded by one of Egypt’s greatest rulers, king Amenhotep III, the ninth monarch of the 18th dynasty who governed Egypt from 1391 to 1353 B.C.

Interestingly, existing on the western bank of Luxor, the city was the main administrative and industrial city throughout the Egyptian empire’s reign.

Also worth noting is that the great discovery of 2021 is a remarkable archaeological find that throws light on secrets in the Saqqara necropolis south of Cairo, as well as the Egyptian dynasties of the 18th and 19th centuries.

Sources claim that the objects discovered are significant discoveries that might transform the ancient burial site into a major tourist and cultural destination. They also believe that it will also update our understanding of the region during the New Kingdom era under King Teti, Egypt’s Sixth Dynasty’s first pharaoh. Teti’s pyramid is surrounded by burial sites that are currently being excavated in a bid to discover more objects from his well-documented era.