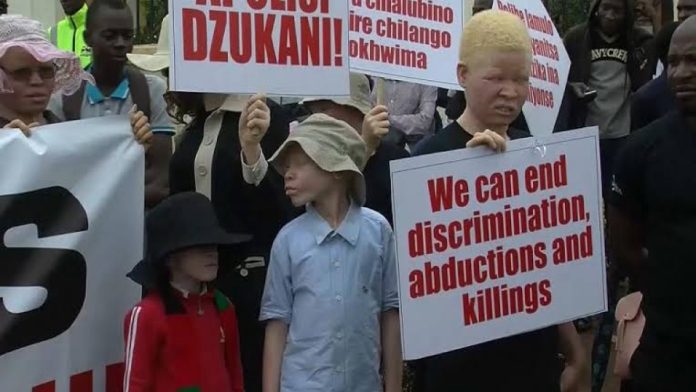 State prosecutors in Malawi have requested that the High Court in the country’s capital, Blantyre, should go ahead to sentence 12 people to life in prison, in connection with the 2018 murder of an albino man, MacDonald Masambuka.

“In terms of life sentences, that’s what we’re aiming for, and we’re hopeful the court will see value in our arguments,” said Senior State Lawyer Pilirani Masanjala.

Five of the 12 defendants were convicted guilty of killing MacDonald Masambuka, a 22-year-old man, during a crime spree that included more than 40 murders and 145 assaults on people with the condition.

According to local media, the defense is asking for sentences of no more than ten years in prison while the clamor for a life sentence grows wider on social media. The defense claimed that some planning and thought went into the action. However, they believe that these offenses are not significant enough to warrant the maximum penalty.

“According to the jurisprudence that we have researched and that we have also provided to the court, in terms of murder, mass murderers and serial killers are the ones who, in our opinion, deserve the maximum sentence. As sad as the situation is, we believe that a maximum sentence is not appropriate in this case “, Masauko Chamkakala, Director of the Legal Aid Bureau, said.

Among those who are facing a life sentence for the crime are a Catholic priest, Masambuka’s brother, a cop, and a medical worker, all of whom were convicted guilty of trafficking human body parts.

On the night of the sentencing of these twelve persons convicted in the 2018 horrific murder of a man with albinism in Malawi, the victim’s father, White Adack Masambuka, begged that his son’s killers be punished to death.

“It is important that those people that committed this murder must be killed also”. White Adack said.

“Masambuka’s brother, the priest, the policeman, and the clinical officer, all of whom MacDonald trusted, deceived him. These are positions of trust, so take them seriously “Steve Kayuni, the country’s director of public prosecutions, explained to AFP in April.

The rise in deaths of albinos increased drastically in 2014, with dozens of people believing that they could utilize the bones, tissues, and organs of albinos to guarantee good fortune in false witchcraft ceremonies and rituals.

The high court ruled on Thursday that the 12 persons involved, conspired to kill Masambuka in order to extract his bones in order to profit financially.

According to sources, Masambuka, whose murder has become a very controversial subject in Malawi, died at the hands of people he trusted. Sources close to the victim claimed that he was enticed by his brother and a Catholic priest, both of whom promised him a woman to marry.

According to Kayuni, over 20 cases involving the murder, attempted murder, exhumation, and sale of body tissue of people with albinism are now being prosecuted in Malawi courts.

Ikponwosa Ero, an activist and former UN expert on albinism, said the latest occurrence “points to a severe safety issue for albinos in Malawi.”

Also, read; Dozens Left Dead Due To Stampede at a Church Charity