Dozens Left Dead Due To Stampede at a Church Charity 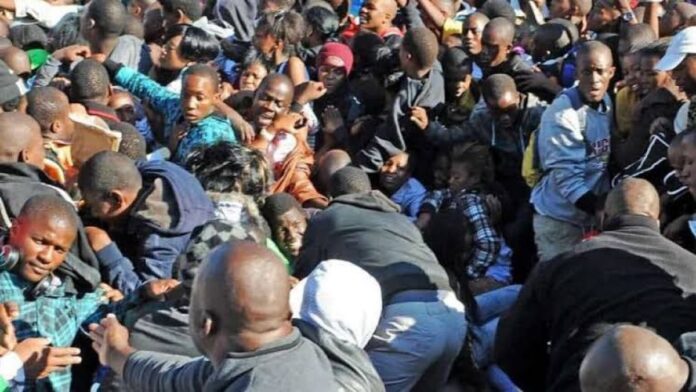 According to authorities, at least 31 people were killed in a stampede during a church charity event in Port Harcourt, Nigeria’s southern metropolis.

According to Grace Iringe-Koko, a police spokesperson for Rivers state, hundreds of people who had arrived early on Saturday to collect food at the celebration broke through a barrier, creating a stampede, in the capital city, Port Harcourt.

Many people who had been queuing since Friday to get into the Port Harcourt Polo Club, which was hosting the Kings Assembly Pentecostal church’s annual “Shop for Free” charity event, broke through the security protocol and barricades, causing an unpleasant event.

Iringe-Koko, the police spokesperson, explained that people had arrived earlier, and some became impatient and began rushing, resulting in stampeding. “While the inquiry is ongoing, the police are monitoring the situation,” Iringe-Koko told Reuters.

According to reports, seven people were injured but are “responding to treatment” following the stampede at the event, which organizers said was intended to “give hope” to the needy. The police spokeswoman also stated that an investigation is currently ongoing and a detailed report will be provided to the public soon.

Fidelis Mbah of Al Jazeera reported from Abuja, Nigeria’s capital, that the death toll could grow.

“Witnesses claim the number could be greater than the police’s official total.” In December 2020, a similar incident occurred when a corporate organization attempted to distribute donations to underprivileged people in Port Harcourt,” Mbah stated.

“About eight people were killed in that incident. The government has called for an investigation to find out whether adequate security measures were put in place to ensure such incidents do not happen again,” he added.

As seen in videos and pictures from the event, clothing, and shoes intended for the beneficiaries were scattered on the ground, with several people lying helplessly on the ground.

While some of the injured were treated in the open field by doctors and emergency personnel, others were supposedly taken to nearby hospitals to be cared for.

In response to the unfortunate incident, the “Shop for Free” event was put on hold as authorities looked into what caused the stampede. Sadly, such incidents are typical in Nigeria, Africa’s largest economy, where government data shows that over 80 million people live in poverty.

In recent years, Nigeria has had multiple food distribution stampede disasters, including a food distribution program run by an aid agency in northern Borno State that resulted in the deaths of seven women last year.

According to a UN Food and Agriculture Organization assessment, around 19.4 million people in Nigeria will be food insecure between June and August 2022.

The research, which was written in partnership with the Federal Ministry of Agriculture and Rural Development (FMARD) and other stakeholders, looks at acute food and nutrition insecurity in the Sahel and West African regions.

According to the research, the food crisis will affect Nigerians in 21 states and the Federal Capital Territory, including 416,000 internally displaced people (IDPs).

It was observed that around 14.4 million people, including 385,000 internally displaced persons (IDPs), are already in a food crisis in Nigeria, which will last until May 2022.