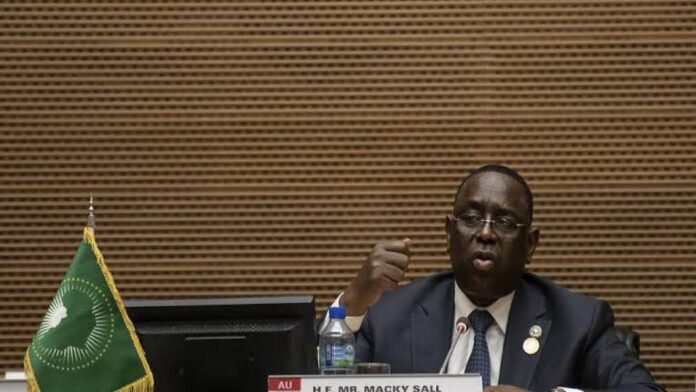 The African Union’s chairperson, Macky Sall, reiterated the union’s appeal for the easing of Western sanctions against Zimbabwe, which have been in place for over two decades.

The AU chair gave a speech at the first AU humanitarian summit in Malabo on Friday, where he explained that Western sanctions have aggravated Zimbabwe’s economic and humanitarian catastrophe, referencing the UN’s Special Rapporteur on the harmful impact of unilateral coercive measures on the enjoyment of human rights.

Two exceptional African Union summits began on Friday in Malabo. Following the opening remarks by Equatorial Guinea’s president, Teodoro Obiang, the AU chairperson, Senegalese President Macky Sall, gave a speech. He demanded that Western sanctions against Zimbabwe, which have been in place for more than two decades, be lifted.

Sall addressed the Zimbabwean economic issues and called for Western sanctions to be eased to effectively solve the said economic crisis.

“Bearing in mind the repeated request of the African Union, I solemnly call for the lifting of the foreign sanctions that have been imposed for years on our brothers and sisters in Zimbabwe,” Sall said.

“In these times of deep crisis, these sanctions further worsen the living conditions of the Zimbabwean people,” he added.

The AU summit’s first day was devoted to the humanitarian catastrophe within Africa. Unfortunately, Macky Sall had to cut short his stay for at least three days due to a mourning period back in his home country, Senegal.

Recall that we had earlier reported that 11 newborn babies died in a hospital fire in the Senegalese town of Tivaouane, prompting outrage and cries for accountability.

In response to the news, the Senegalese president and Au Chair, Macky Sall, released a statement saying that he “learned with pain and consternation the death of 11 newborn babies in the fire that occurred in the neonatology department of the Mame Abdou Aziz Sy Dabakh hospital in Tivaouane.”

Without giving further details about the event, Macky Sall expressed his “deepest sympathy,” in a Tweet posted by the official presidential account on Thursday. Unfortunately, the deaths of these 11 babies since left him with a decision to declare a mourning period, one which led to his decision to shorten his stay at the AU Summit by 3 days.

However, Sall didn’t leave without making his commitments clear. He expressed Senegal’s contribution to providing solutions to key discussions at the summits.

“In anticipation, I would simply like to announce a modest contribution from Senegal of three million dollars for humanitarian action in Africa,” Sall stated.

Following the opening ceremony, a pledging conference was held to discuss the issue of humanitarian aid funding. It is the first “extraordinary humanitarian meeting” convened by the African Union.

The meeting was also attended by international donors. According to a UN estimate from 2020, 282 million Africans are malnourished. Due to the effects of the Ukraine war, violence, and climate shocks, this figure could potentially rise in 2022.

Read also; 6 Ways to Make Money As a Remote Software Developer in Africa