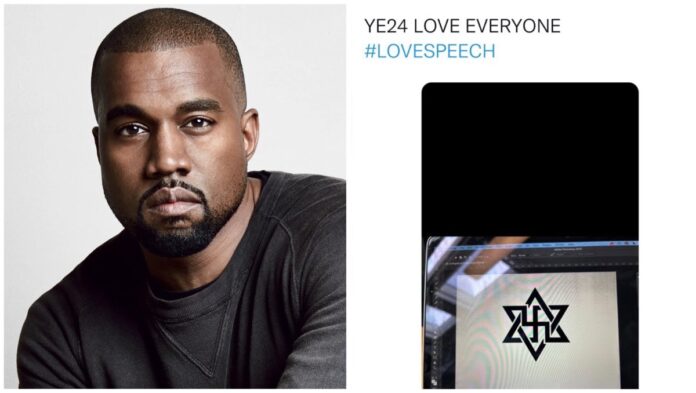 Kanye West’s Twitter account was suspended Friday morning after a tweet by Elon Musk revealed that the rapper had once again broken the rule against incitement of violence.

West posted a photo to Twitter Thursday night to promote his 2024 presidential campaign with an image of the Star of David covering a swastika. The post was removed from Twitter within hours. West also posted an unflattering photo of Elon Musk, prompting Musk to clarify that “[West’s] account was suspended for inciting violence, not an unflattering photo.”

The incriminating photo was accompanied by the caption “YE24 LOVE EVERYONE #LOVESPEECH,” to which Elon Musk replied, “It’s not.” Then a Twitter user responded to Musk by asking, “PLEASE FIX KANYE.”

The Twitter CEO then wrote: “I did my best. Despite this, he again violated our rules against incitement to violence. The account will be suspended.”

This came just hours after West appeared in an interview on Alex Jones’ Infowars website in which he denied the Holocaust and said, “Every human being has something of value that they brought to the table, especially Hitler,” Ye continued. “Also Hitler was born Christian.”

Of Hitler, West added, “He wore a really nice uniform.” “He was a very good architect…”

West was virtually not on Twitter for the two years leading up to his Oct. 9 comeback, when he said, “I’m getting a little tired tonight but when I wake up I’m going Death con on the Jews,” probably incorrectly referring to an internship at the US Army’s Defensive Readiness event, or DEFCON.