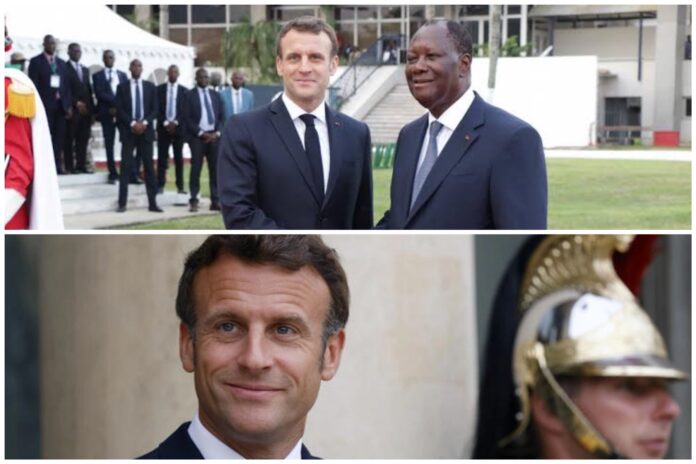 French President, Emmanuel Macron will tour sub-Saharan Africa from July 25 to 28, taking him to Cameroon, Benin and Guinea-Bissau as announced on Thursday by the Élysée Palace. An announcement made just weeks after the French President announced a new strategy for Africa which he titled ‘Rethink Africa’

This trip to Africa, the first since Macron’s re-election in April, will focus on the food crisis caused by the war in Ukraine, agricultural production issues and security issues, according to the presidency.

It is intended “to mark the continuity and permanence of the President of the Republic’s commitment to the process of renewing relations with the African continent”, says a statement from the French Presidency.

The first leg of this journey takes Macron to Cameroon, the biggest economy in Central Africa. The French president will meet on Tuesday with his colleague, President Paul Biya.

According to a released statement, the leaders will discuss the possibilities of French investment in Cameroonian agriculture. Anti-jihadist issues in northern Cameroon will also be a hot topic as the leaders meet.

Currently, the north of Cameroon faces an increase in deadly attacks as the jihadist threat extends from the Sahel to the countries of the Gulf of Guinea.

On Thursday, Emmanuel Macron will end his tour in Guinea-Bissau, a small country in West Africa. This will be Macron’s first trip to a Portuguese-speaking country on the African continent.

The President of Guinea-Bissau, Umaro Sissoco Embalo, is about to assume the leadership of the Economic Community of West African States (ECOWAS).

With every one of these countries being criticized by activists for their human rights records, the Elysee insisted that governmental and legal issues be addressed, albeit “without media noise, but in the form of direct exchanges between heads of state”.

Macron’s first term was marked by visits to non-French-speaking African countries, including regional powers Nigeria and South Africa, as he sought to engage with the entire continent and not just former French possessions.

Benin is a former French colony, but Guinea-Bissau was once a Portuguese colony, while Cameroon’s colonial heritage is a mix of British and German as well as French.

Macron, for his part, insisted that France’s military presence in the region will adapt and not disappear once Mali’s withdrawal is complete.

He announced last week that a reconsideration of France’s presence would be complete by the fall, saying the military should be “less exposed” going forward, but using it was still a “strategic necessity”.

Mali’s withdrawal follows a breakdown in ties with the country’s ruling junta, which has accused Western states of relying on Russian Wagner mercenaries rather than European allies to fight an Islamist insurgency.