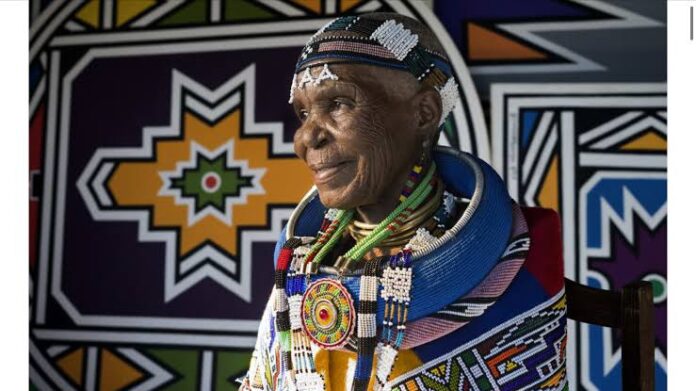 Esther Mahlangu is considered by many to be the queen of African art. Her colorful art, its display of intelligence, and the referencing of Africa’s cultural beauty have helped her become one of the most pronounced figures in the world of international art.

In contemporary indigenous art, she is one of the best to ever hold a brush. However, she first came to the world’s attention in 1989 through The Magicians of the Earth, an art exhibition aimed at showcasing some of the world’s greatest talents.

During the legendary European art exhibition entitled Magiciens de la Terre, she surprised the audience by painting a complete replica of her house live in front of the audience.

Many were amazed to see the beautiful skills of the lady who hailed from the Ndebele community—in South Africa. Perhaps what makes her stand out, and confidently so, is her ability to make bold statements with her paintings, which has made her close allies with popular brands around the world.

With an incredible contract, she emerged as the first woman and first African artist hired to decorate a BMW 525i car that would later be displayed at the National Museum of Women in the Arts in Washington, D.C. in 1999 and also at the British Museum in London, 2017.

Her fine art has also found its way onto British Airways’ Rolls-Royce planes. She also had a partnership with Belvedere Vodka where she painted her bottles in colorful designs that sparked an interesting trend.

The self-taught South African whose daring Ndebele-inspired paintings are collected and exhibited around the world needs no introduction.

Her colorful geometric art is recognized by most as a contemporary link to the traditionally painted walls of rural homes in Limpopo and Mpumalanga. Esther modernized these traditional motifs by adapting them to new media, pioneering a modern African art form.

For Esther, the paintings defend her heritage and serve to raise the flag of her culture and keep her ancestors alive. It’s a calling, she believes, and one that she doesn’t want to give up prematurely.

For her patrons (such as Oprah Winfrey and Usher), the artist’s work has been gaining value, with exhibitions at the Museum of Arts and Design in New York, the Guggenheim Museum in Bilbao, the National Museum of African Art at The Smithsonian Institution, and most notably at the Center Georges Pompidou in Paris, just to name a few.

However, in her 75 years as a painter, the artist’s work was significantly less well known here at home, leaving fewer opportunities for her people, South Africans, to see and interact with her paintings in person.

Although recently, during her 85th birthday, The Melrose Gallery opened its largest solo exhibition to date with a monumental work created over the past three years by artists such as the legend.

The art collection was curated by Ruzy Rusike who explained that “95 percent of Dr. Mahlangu goes to international museums and private collectors, and it is vital that more of her work is preserved in her home country.”

“There is an exciting tension between the traditional nature of Ndebele’s design and modern contemporary media and the scales at which his work has been presented in this exhibition, making it as relevant to an apartment in New York as it is to a house in Johannesburg.” adds Ruzy.

The artist’s retrospective will open at Melrose Gallery in early 2023 and will then tour the world for another three years.

Then there’s her upcoming purse collaboration with businesswoman and TV presenter Carol Bouwer to keep an eye on, as well as two massive 16-meter paintings that will soon be installed at Southgate Mall. With that in mind, there’s no sign that this iconic octogenarian artist is slowing down anytime soon.

“These works of art I create remind me that art will help you know that we are all human. The blood we have is the same. And that’s the beauty of art,” she says.